Nicole Thomas, part of the Buildings and Grounds staff that keeps Cooper heated, cooled, lit, and clean, works to keep the school looking its best even in her off hours. Last spring, Ms. Thomas, a talented seamstress was approached by Christine Sarkissian, manager of rental programs, when the former US District Attorney Preet Bharara was scheduled to speak at the Great Hall. It was his first public appearance since being fired by the president and promised to be a widely-reported event. Ms. Sarkissian had noted that the skirt of the Lincoln Lectern—the very one the 16th president used while campaigning for the 1860 election—had grown worse for wear, the golden tassels loose and the fabric frayed. She knew just who to contact to spruce up the lectern skirt and make it camera-ready. 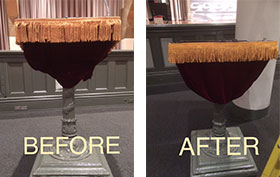 Enter Ms. Thomas, well known on campus for her sartorial skills as a result of running a weekly workshop for staff and faculty interested in learning needle arts. She took one look at the skirt and pronounced it “a safety pin extravaganza.” It had been held together through the years using a variety of strategies—Velcro, tape, and yes, safety pins. She found it daunting, but as she says about any job, “You’ve got to go into it with the right attitude.”

First, she conceptualized several solutions, finally choosing one that not only made the skirt more visually appealing but also easier to use for the IT staff. Instead of having the skirt hung (often perilously) from the lectern, she opted to line the bottom hem of the skirt with elastic to keep it secure as well as to make installation and removal of chords simple for the AV team. “Paul Tummolo loves it,” she said, referring to the school’s multimedia support manager.

She tried to be as true to the design of the earlier skirt, which itself was a replacement. (No one is quite sure when the original was discarded.) She did a lot of the sewing by hand, though the hems were done by a sewing machine she keeps in her office for the biweekly workshop for which she teaches sewing while Gloria Nicholas, administrative assistant in the President’s office, teaches crocheting. She emphasizes having a clear strategy for any project: “Prepping is the hardest thing because your strategy has to be on point. Because if it’s not, you’re going to be backtracking and that takes more time.”