Judith Simonian, one of three Cooper Union faculty members to receive a Guggenheim Fellowship this year, has taught in the school’s Continuing Education Program for 19 years. She says of her students, “It’s very exciting to see the raw enjoyment of these people, and there’s so much they want to do that’s very learnable. It’s stimulating. What they do is often so raw, very unspoiled.”

Her paintings, which usually graft two scenes onto one canvas, exude an extraordinary energy that comes close to her description of her students’ work. Blue Feast (2013), for instance, shows an elegantly set table literally wiped out by an imposed winter landscape, slashes of paint on the dining room wall as if to indicate energy released when one peaceful scene crashed into the other. 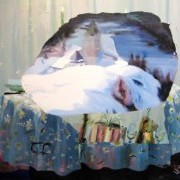 Simonian says, “There’s always been this duality in my work. I find parts of images. I’m undiscriminating. It doesn’t matter the source as long as it does what I want it to do. “

During the 1980s, she used cardboard to block off geometric shapes on graffitied walls in Los Angeles and then sandblasted the area around the cardboard. The process highlighted segments of the graffiti, and “then gangs filled up the cleaned off part of the wall. I would return to make my hard-edged shapes. This dialogue went back and forth and was pretty fascinating to watch,” Simonian recalls.

She credits her interest in colliding scenes to the art history courses she took in college that juxtaposed two sets of slides.  “We’d see ancient art, early Christian art. You saw them in ruins as if it were intentional. That kind of vision has been imbedded in my head,” she says. “It always interests me when I see incorrectly—there are some things that I can’t make out. The way I try to make sense of it is to paint and it becomes more real when I disturb the scene. Everything becomes more clear because one thing illuminates another.”

Simonian plans to use her fellowship to buy supplies and hire studio help, particularly with stretching her canvases, which she does after she paints.

She also will travel to Normandy to sketch and paint. “I always gather first-hand information as a way of encountering where I am. It’s just feeding my visual memory.”

A native of Los Angeles, she has lived in New York for about 25 years and has found the city arts scene stimulating for her own work. She admires Joanne Greenbaum and Judy Linhares among other artists, noting “their way of seeing and their way of digesting what they see, and their respect and insistence on a certain kind of mark.” 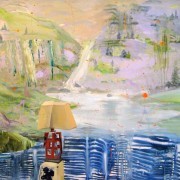 That attraction makes since since Simonian’s paintings are also notable for their mark making. For Fine Asian Atmosphere, she decided to add orange splatter marks to the finished canvas, which shows a red lamp against a backdrop of mountains reminiscent of Chinese scroll painting. The orange was added both to create aesthetic balance in the painting (“It needed an accent of another color”) and as a “critique of painting.…It reminds you that it’s an illusion. “