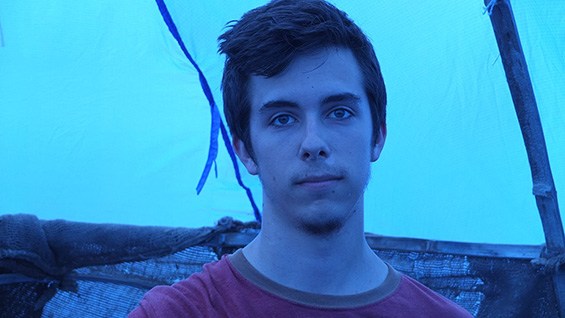 Harrison Cullen inside a shelter he helped build in Ghana covered in blue plastic. Photo by Peter North A'15

Harrison Cullen, a senior due to receive a Bachelor of Science in engineering degree, will be this year's student commencement speaker.  A committee comprised of faculty, staff and students chose Harrison to give the address after he participated in the annual student speaker competition in April. He says he plans to address the importance of unity among members of The Cooper Union in forging a vision for its future.

Harrison, who grew up in Lindenhurst, Long Island, wants to contest the notion that students at Cooper’s three schools have little in common. He says, “We are so similar already and we have to stop pretending that we’re different. That’s why all three of these schools are here in the first place. It’s that we all occupy almost entirely the same circle in a Venn diagram.”

For many years, Cooper has eschewed a traditional valedictorian for a speaker chosen by a committee that assesses the quality of students’ speeches and the effectiveness of their delivery. The students who participate give their speeches on the stage of The Great Hall, said committee chairman Dean of Students Chris Chamberlin.

Harrison, who has participated in protests against tuition, decided to enter  the competition because he believes his years of student activism have given him insight about the Cooper community that is important to share.  When he first arrived at The Cooper Union, he was excited about the prospect of doing interdisciplinary work with art and architecture students. He found that there was less integration than he’d expected, so he worked to cross those boundaries. He discovered that "people in the other schools are so interesting and amazing and in my school as well."

He believes arguments about tuition have made it more challenging to bridge students in the three schools. While he thinks that communication has improved since he began at Cooper, he wants to use the commencement platform to urge students to see themselves as allies working towards the same goal.

The founding of The Cooper Union, Harrison argues, went against the grain to create a new paradigm of what education could be and who could have access to it. He believes that protest, then, is an implicit part of Cooper’s history, and nothing to shy away from. In fact, he says, the issues the Cooper community is wrestling with are part of a larger discussion about the rising cost of education across the country. "We’ve been given the opportunity; we have to show that it can work," he says about a tuition-free future for the school. “We have to show that it is real and not just idealist nonsense."