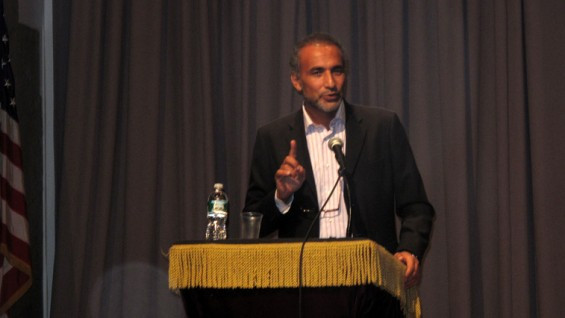 Tariq Ramadan at the Great Hall in 2012

A day after violent anti-American riots in the Middle East led to the deaths of four Americans, including the Ambassador to Libya, Tariq Ramadan, the Islamic scholar once banned from entering the U.S., appeared at the Great Hall for the first of the season’s talks sponsored by Cooper Union’s Public Programs. Upon taking the lectern Ramadan immediately turned to the subject in the news declaring the violence, “anti-Islamic.”  Ramadan spoke in front of a moderately-sized, mostly young crowd.  He referred to the “silent majority” of non-violent Muslims who did not support the violence.  But he also went on to condemn the filmmakers calling them “racist” and “dangerous to democracy.”

Dressed in a dark suit with an open collared, striped shirt, Ramadan moved on to the original subject of his talk titled, Islam and the Arab Awakening. Appearing as part of a tour supporting his latest book, Ramadan summarized his thoughts on changes in the Middle East.  “Spring is still coming,” Ramadan said, referring to the popular moniker “The Arab Spring,” characterizing the overthrow of entrenched dictatorships in Tunisia, Egypt, Libya and perhaps Syria.  The real revolution, Ramadan said, “is the shift in the Arab mind that something can be done about dictators.”  But, while the main strength of the movements is “no dictators,” said Ramadan, “The main weakness is: what comes next.”

Ramadan’s talk contrasted sharply with the last time he spoke in the Great Hall two years ago.  The Swiss-born Professor of Contemporary Islamic Studies at Oxford University made his first public U.S. appearance at the Great Hall in 2010 following a five-year travel ban that began during the Bush administration.  A packed, boisterous hall and notable police presence two years ago cooled to a quite, half-filled hall with a handful of Cooper security staff in their usual places.

Audience reaction was mixed, even among a crowd comprised of many people of Arab descent.  Arslan Rahman of Staten Island described Ramadan’s talk as “very enlightening.”  “It was nice to get the intellectual point of view over the usual political pundits,” Rahman said.  But Mustafa of Brooklyn thought the talk was merely “okay,” feeling that Ramadan “denied the participation of the people” in the Middle East uprisings.

David Greenstein, Director of Continuing Education and Public Programs, characterized the talk as “very interesting, funny and provactive.”  “He seemed very down last time,” said Greenstein, “I was struck by how lively he was in comparison.”

Come October, though, the Great Hall may be back to a high-security zone when the Russell Tribunal rents the space for a two-day session on Palestine.