In Late Light  (The Johns Hopkins University Press), appearing in May, collects poems written over the last eight years by Brian Swann, Professor of the Faculty of Humanities and Social Sciences who has taught at The Cooper Union since 1972. He cannot recall, he says, when he started writing poetry or exactly why. "Perhaps because I was reading so much," he offers, "it was a bit like breathing, I think." The pursuit came naturally to him even though he grew up working class in Northumberland, in northeast England. His passion would eventually take him to Queens' College of Cambridge University, the first scholar in his family, and later to Princeton. This latest collection, Prof. Swann's eighth, finds the author sifting through his personal history and his enduring fascination with nature -- he spent much of his childhood at a farm across the road from his home -- to create poems he calls "open and mysterious." 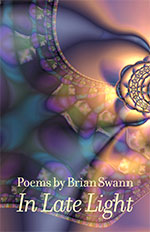 The title perfectly reflects the poignant quality of the collection while also touching on a running theme of the wonder of the natural world. "The poems of In Late Light are united by both the of idea being late -- I'm not a young kid anymore -- and of the idea of light both literal and in the sense of enlightenment that comes with a certain age," Prof. Swann says. "It explores the idea that you can see a little clearer because the light's a little stronger even though it may be dimming and won't be around forever."  You will find the first poem of the book, "Worlds," at the end of this article.

Stars figure prominently in the imagery of the poems, as do animals, streams, rocks and plants. "I have always been more interested in that thing that we are all doing our best to destroy: the so-called natural world," Prof. Swann says. "All sorts of strange things happen just by walking in the woods, if you look." The poem "The Cricket," is typical. It begins: "A raw sun, just / what it is, scrapes / the last few stars / off the sill. Smoke / and dust drift up but / I open the window wider and-- / Listen: something is cutting us off."

"The Cricket" exemplifies the two themes one finds most commonly in the poems of In Late Light. The first, focusing on the natural world and exploring its effect on our inner selves often blends into the notion of personal history and memory. Many of the poems use the first person singular and can occasionally become highly personal. Often specific family members are named such as his father, mother, wife and even aunts. One poem reminisces about an aunt who apparently enjoyed stripping off her clothes at family gatherings. But one can never be too sure of the poem's being strictly historically accurate. "Sometimes you want to get something out in front of you," Prof. Swann says. "It doesn't necessarily mean its true but it means it's true enough. You get satisfaction from objectively seeing it in front of you so that, maybe, you no longer feel victimized by it or obsessed by it."

Without reading so much as a word, a casual flip through the pages of In Late Light reveals the author's attention to a poem's design as much as its language. Line spacing, indentation and length are carefully thought out. Written in free verse, the "rhyme" of each poem instead appears visually. "The role of design is the music," Prof. Swann says. "Unless you are going to be a great poet like Richard Wilbur, a real master of metrical structures, you have to find a way of writing in what Ezra Pound called the 'musical phrase.' Having an arbitrary shape doesn't do it for me. There has to be a reason why a thing is shaped the way it is."

Prof. Swann, in spite of teaching here for over forty years, has no plans to retire. "I love the students here," he says. Besides continuing to teach he has already completed his next collection of poetry as well as two other books. He sums up his poetic tastes this way: "Good poetry welcomes you in, but with a little bit of luck it looks strange when you get there. If you can say you 'get' it there is probably something wrong with it."

"Worlds" by Prof. Brian Swann, the first poem of his new collection In Late Light.