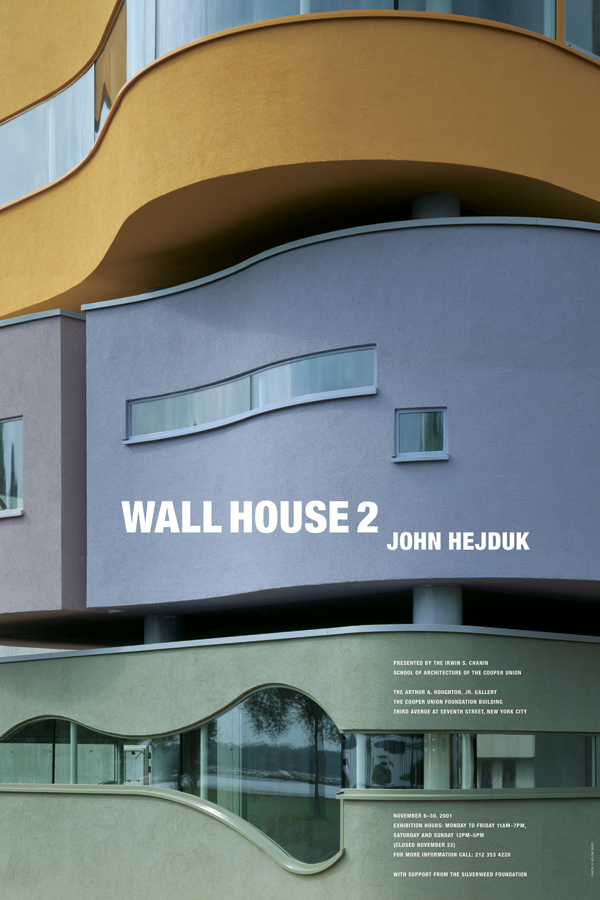 Wall House 2 was originally to be built in Ridgefield, Connecticut in the 1970's for the landscape architect A. E. Bye. The initial sketches and drawings for the house were developed during the same period of time that the interior of The Cooper Union's Foundation Building was being renovated by John Hejduk. It is fitting, then, that this is the first place where Wall House 2 is exhibited in the United States; a house presented within a school, both created by the same architect.

The design of Wall House 2 was conceived in part through John Hejduk's study of cubist still life paintings, and his interest in the re-presentation of reality on the vertical surface of a painted canvas. This led to the decision to suspend the living elements of the house from the concrete wall, thus isolating each volume independently, and using the wall as a plane through which one must pass to move from space to space. The coloration of the elements came from the study of the colors of Le Corbusier's Maison La Roche, where John Hejduk spent several days installing an exhibition of his own work in 1972.

"After that experience, I could never do another white or primary-colored house. In La Roche, the colors were hardly apparent at first, but after you were there a while you saw not only that they changed constantly, but that they were delicate and muted, and also saturated at the same time."

Wall House 2 is one of many wall houses designed over John Hejduk's vast and prolific career, but it is the only one built to date. The fabrication of this house is an enormous contribution to the world of architecture. In just one month, it received over 12,000 visitors. It is a house that yearns to be inhabited, studied and explored, as it holds many secrets yet to be revealed.