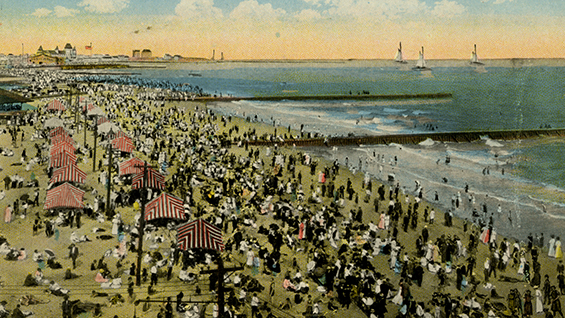 This online exhibition, originally presented as a Third Floor Hallway Gallery show in the fall of 2017, features postcards selected from the Architecture Archive’s Joseph Covino New York City Postcard Collection. Dating from the late 19th to mid-20th century, the collection is among the largest of its kind. Its nearly 3,800 postcards document New York City’s built environment and infrastructure, recording a city in constant flux across several decades of urban development—from no-longer-extant buildings, interiors and businesses to piers, parks and monuments throughout all five boroughs.

The profusion of postcards depicting the city’s beaches in general, and Coney Island in particular, is not incidental:

“Coney Island’s development as a summer resort for the multitude coincided with the lifting of various post office restrictions on the mailing of picture postcards at the turn of the century, and many visitors delighted in buying either black-and-white or colored views of Coney Island Scenes. They collected them as personal souvenirs and sent them to friends and relatives back in the city and elsewhere as tokens of their excursions. Messages like… ‘Greetings to all from Coney Island,’ so familiar to us now, constituted a radical break with the older epistolary style in favor of a clipped new form of communication for an age of mass leisure…As such postcards suggest, an essential element of Coney Island’s appeal for virtually all of its visitors was the contrast it offered to conventional society, everyday routine and dominant cultural authorities.” (1)

The postcards featured here document the astonishing transformation of the city’s southern coastline during the last decades of the 19th century. At Coney Island, an influx of private capital, transportation infrastructure and unfettered commercial development rapidly converted the island’s pastoral landscape, still sparsely inhabited after the Civil War, to “a laboratory of the new mass culture where the raw embryonic elements of physical sensation and mechanical invention were tested.” (2)

Between 1875 and 1881 alone, the equivalent of over $400 million was invested in the creation of Frederick Olmstead’s Ocean Parkway, linking Prospect Park to a newly constructed grand concourse along the oceanfront; the parallel development of four railroad lines connecting Coney Island to Brooklyn and Manhattan; the construction of two massive ocean piers (the Iron Pier and the New Iron Pier) which serviced steamboats, each capable of ferrying up to 40,000 passengers daily from Manhattan; and the proliferation of hotels and bathing pavilions along the newly created Manhattan Beach resort on the island’s east end.

The development of Manhattan Beach effectively “subdivided [the island] into four zones that mirrored to a remarkable degree the class divisions of the metropolis.” (3) Moving east across the island, Norton’s Point, on the west end, catered to a poor “underclass,” deemed vice-ridden and unsavory by the middle- and upper-class establishment, while West Brighton Beach (from roughly West 31st Street to Ocean Parkway) harbored broad appeal for predominantly immigrant, working-class excursionists. Brighton Beach (Ocean Parkway to West End Avenue) attracted the professional middle-class, while Manhattan Beach was created as an exclusive enclave for the wealthy elite.

The exhibition’s galleries begin with a visual cross-section of emblematic turn of the century Coney Island structures and track east from West Brighton, home to the island’s three iconic amusement parks—Steeplechase, Luna Park and Dreamland—to the hotel resorts of Brighton and Manhattan Beaches, and across the inlet to Rockaway Peninsula, where commercial development—though subject to similar economic and cultural forces—was initially tempered by Rockaway’s relatively less accessible beaches and dynamic coastline.

The postcards are supplemented with photographs, many of which were taken by the Detroit Photographic Company, a publishing firm launched in the 1890s that held exclusive rights to the Swiss “Photochrom” process of converting black-and-white images to color for the mass production of photolithographic postcards and prints. Some of these photographs, which are freely available from the Library of Congress, are reproduced on postcards in the collection.

The Archive is currently digitizing and cataloging the entire Covino Collection for web-based public access. This work has been support by a 2016 grant from the Gladys Krieble Delmas Foundation and a generous grant from Dr. Jack Eichenbaum (ChE ‘63), an urban geographer and the Queens Borough Historian.

Films
The following early films, held by the Library of Congress, depict Coney Island at the turn of the 20th century: