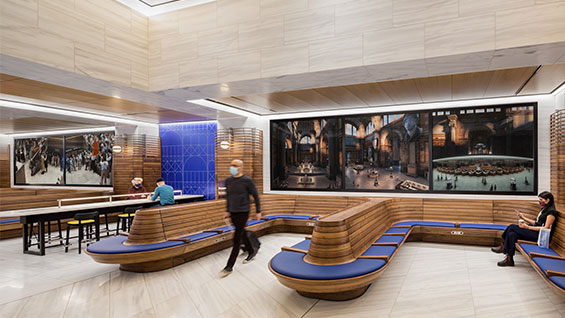 Stan Douglas’ free virtual talk on January 28 centers on his new permanent public commission Penn Station’s Half Century, 2020, a captivating photographic series that reconstructs nine remarkable but forgotten moments from the history of the original Pennsylvania Station (1910-1963). The artist has created this monumental site-specific artwork for the newly opened Moynihan Train Hall in New York City, by weaving together hundreds of photographs of staged costumed performers with digitally recreated interiors of the demolished Station. Challenging himself to work on a massive scale and with a technically demanding media, Douglas has created a landmark artwork that responds to the historic past and cutting-edge future of the busiest transportation hub in North America.

For Penn Station’s Half Century, Douglas drew on archival research to recreate serendipitous and poignant moments that range from an impromptu vaudeville show directed by Burt Williams during an epic snow storm in 1914, to final moments of affection between soldiers and their loved ones before being deployed in 1941 for duty during World War II. The cinematic quality of the nine panels revives these moments in uncanny detail. The resulting images pay tribute to McKim, Mead & White’s original landmark building and to the layers of human experience that bring our civic spaces to life. Spanning more than 80 feet in the Ticketed Waiting Area adjacent to the skylit boarding concourse, this is Douglas’ largest public installation to date and first permanent public art work in the United States. His artist talk will offer behind-the-scenes insights into the making of these groundbreaking photographs and contextualize them in Douglas’s practice.

The Train Hall was unveiled to the public by Governor Andrew M. Cuomo on January 1, 2021 and transforms the James A. Farley Building into a world-class transportation hub that increases the existing Penn Station rail complex's concourse space and reshapes the travel experience of the busiest passenger transportation facility in the Western Hemisphere. The artworks were commissioned by Empire State Development in partnership with Public Art Fund.

Since the late 1980s, Canadian artist Stan Douglas has created films and photographs—and more recently theater productions and other multidisciplinary projects—that investigate the parameters of their medium. His ongoing inquiry into technology's role in image making, and how those mediations infiltrate and shape collective memory, has resulted in works that are at once specific in their historical and cultural references and broadly accessible.

Douglas’s work has been the subject of solo exhibitions at prominent institutions worldwide since the 1980s. Recent shows include those at the Julia Stoschek Collection, Berlin (2019-2020); Plug In Institute of Contemporary Art, Winnipeg (2019); Western Front, Vancouver (2019); Musée d'Art Moderne Grand-Duc Jean (MUDAM), Luxembourg (2018); and Les Champs Libres, Rennes, France (2017).  The artist was recently selected to represent Canada at the 59th Venice Biennale in 2022. Douglas participated in the 58th Venice Biennale in 2019, where he debuted his video installation Doppelgänger and also presented a selection of photographs from his 2017 series Blackout.

Public Art Fund Talks, organized in collaboration with The Cooper Union, connect compelling contemporary artists to a broad public by establishing a dialogue about artistic practices and public art. The Talks series feature internationally renowned artists who offer insights into artmaking and its personal, social, and cultural contexts. The core values of creative expression and democratic access to culture and learning shared by both Public Art Fund and The Cooper Union are embodied in this ongoing collaboration. In the spirit of accessibility to the broadest and most diverse public, the Talks are offered free of charge.