Hannah Landecker, "Built to Last: An Antioxidant Perspective on Bodies and Things"

Hannah Landecker gives a free, online lecture as part of the Spring 2022 Intra-Disciplinary Seminar series about the antioxidant which is a technical and cultural object of the early twentieth century. Originally pursued in the context of preventing image decay in photograph fixation, the chemistry of delaying rancidity, heading of rubber deterioration, and preventing explosions in oil transport took the form of making or finding specific molecules with antioxidant properties that could be added to both diets and industrial products.  This led to the commercial development between 1930 and 1950 of many natural antioxidant commodities such as Vitamin E, and synthetic ones such as BHT and ethoxyquin, still widely used today.  The study of oxidative stress arose in this hybrid petro-animal body of duration, simultaneously a concern about atomic radiation exposure, radical oxygen species, and cancer in human cells, and a concern about commodity lifespan.  Today, synthetic antioxidants are pervasive in the environment and natural antioxidants prop up the promissory economies of health foods, rejuvenating cosmetics, and bio-based production systems.  As we begin to ask whether our material things are lasting too long - or not long enough - and the technical parameters of decay figure prominently in negotiations of aging, biodegradability and toxicity, it is useful to engage directly with the history and future of these techniques and technologies of rancidity and lifespan, into which so many values and temporalities are built. 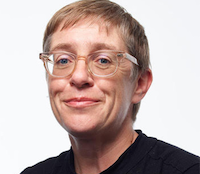 Hannah Landecker is a historian and sociologist of biotechnology and medicine. She holds a joint appointment in the life  and social sciences at UCLA, where she is a Professor in the Department of Sociology, and in the Institute for Society and Genetics. In 2021-2022 she is a Fellow at the Wissenschaftskolleg zu Berlin.  Landecker is the author of Culturing Life: How Cells Became Technologies (Harvard UP, 2007), and has written widely on  the intersection of biology and film, the rise of antibiotic resistance, and the history and sociology of metabolism and metabolic disorder.