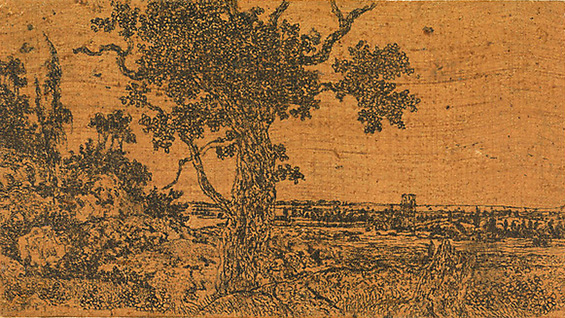 'Landscape with an Oak Tree and a Distant View' ca. 1618-22. Hercules Segers. Courtesy of Rijksmuseum, Amsterdam

The Interdisciplinary Seminar presents a free, public conversation between the Painters Nathlie Provosty and Julia Rommel discussing the dependence on the physicality of materials in painting to create emotional space, whether it be the intricate wood framing of Northern Renaissance altarpieces, the impasto of Van Gogh or the wild experimentation with chance elements of printmaking in the work of Hercules Segers.

Nathlie Provosty was born in 1981 in Cincinnati, Ohio and studied painting and art history at Maryland Institute College of Art (BFA, 2004) and the University of Pennsylvania (MFA, 2007). The year between her undergrad and graduate school she lived in India as a Fulbright fellow. In the summer of 2007 she moved to New York. Her first one-person exhibition in the city opened in 2012 at an experimental artist-run gallery called 1:1, and since she has exhibited nationally and internationally including at Nathalie Karg Gallery in New York; A Palazzo Gallery in Italy; Jablonka Maruani Mercier Gallery in Belgium; and Stefan Lundgren Gallery in Spain. The artist’s distinctions include the Rosenthal Award of the American Academy of Arts and Letters and a Marie Walsh Sharpe Space Program studio residency.

Julia Rommel was born in 1980 in Salisbury, Maryland and lives and works in New York. Her first solo museum show, Two Italians, Six Lifeguards, was hosted by the Aldrich Museum in Ridgefield, CT last year. Recent solo exhibitions include: Man Alive, Bureau, NY, 2016, and A Cheesecake With Your Name On It, Overduin & Co., Los Angeles, CA, 2016. Recent group exhibition include In the Making, Luxembourg & Dayan, New York, 2016; Space Between, The FLAG Art Foundation, New York, 2015; Where Were You, Lisson Gallery, London, 2014; The Retired Architect, Wallspace Gallery, NY, 2014. Rommel’s work is held in the public collection of the Museum of Modern Art, New York and the Whitney Museum of American Art, New York as well at the Albright-Knox Art Gallery, Buffalo, New York.