In Memoriam: Martin Trust ME'56 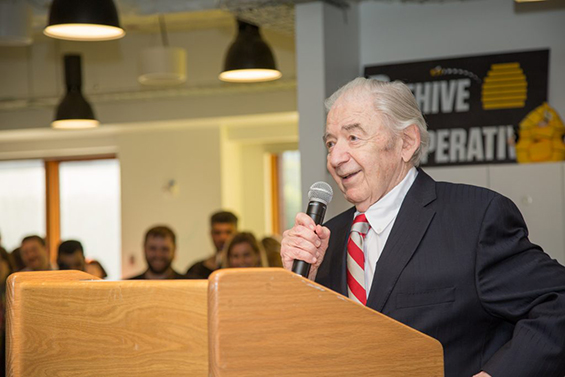 Former trustee Martin Trust, a 1956 graduate of The Cooper Union, passed away on September 12.

Mr. Trust, a long-time champion of The Cooper Union, founded MAST Industries, a company that transformed the apparel industry by developing global networks to keep costs down while being responsive to changes in fashion. He served on Cooper's board of trustees from 1989 to 2013, was a member of the Peter Cooper Society for donors who give more than a million dollars to the school, and most recently established the Martin Trust 1956 Scholarship to be awarded to three engineering students each year. In 1997, the CUAA presented him with the Gano Dunn Award and named him Alumnus of the Year in 2006.

A native of Brooklyn, Mr. Trust attended Brooklyn Tech High School before earning his degree in mechanical engineering at Cooper. He was awarded a $2,000 scholarship to attend MIT’s Sloan School of Management for graduate school. In June 2016, Mr. Trust spoke at the re-opening of the center he founded at MIT for entrepreneurship. He recalled how his plans to attend graduate school were realized: “The donor of the scholarship I received was a Cooper Union graduate named Mr. Rossi, a gentleman I had never met before — or even spoken to — but someone I clearly benefited from, because of his philanthropic generosity to an individual he had never laid eyes on before graduation day at Cooper Union … 60 years ago.”

As it turns out “Mr. Rossi” was none other than Irving Rossi, a 1909 graduate, who revolutionized the steel industry. After observing machinery in Germany that was used to cast brass, he adapted the process to introduce continuous casting of steel, a method that let manufacturers greatly improve steel quality while also lowering costs by streamlining the process that took steel from a molten state to a usable form.

The scholarship money he provided to Martin Trust, known as Marty, let the younger man earn his MS at MIT and then work for various apparel companies where his mechanical knowledge put him in good stead to learn the specifics of the trade. In 1970, he was ready to start his own business, and much like Irving Rossi, his engineering experience coupled with business training, made for a powerful combination. He and his wife Diane, known as Dena, started MAST Industries in their apartment in Canton, Massachusetts, beginning as a distributor of sweaters manufactured in Hong Kong. One of their first customers was Leslie Wexner, who had a small chain of women’s clothing stores in Ohio called The Limited. The two companies expanded together, with Trust perfecting the pipeline of production and becoming a pioneer in global manufacturing of apparel. Bill Aulet, managing director of the Martin Trust Center for MIT Entrepreneurship recently wrote that Trust “revolutionized the production of clothing…by fostering strategic partnerships in all parts of the world…. Now new fashion trends were not only spotted quickly, but could be delivered upon at a speed and price point that were unheard of and at which others could not compete.”

The Limited, which became a fixture of malls across the country, bought MAST in 1978 and Mr. Trust served as president and CEO until 2001. Meanwhile, he pursued other opportunities, most notably in Sri Lanka. He convinced major European brands Triumph and Speedo to join him in investing in the country as a manufacturer of their products, making Sri Lanka a leader in intimate apparel and swimwear. According to the Sri Lankan Times, Mr. Trust’s company employed 20,000 in the country, which was in the midst of a civil war, which dragged on from 1983 until 2009. In 1994 the nation recognized him as “as the father of the modern Sri Lankan apparel industry,” as the Times put it, by giving him the honorific Sri Lanka Ranjana. He acted as the country’s Consul General of New England for 10 years.

Back in the Boston area, the industrialist helped found the Martin Trust Center for MIT Entrepreneurship to teach students strategies, financing, and a whole range of other skills to start innovative new businesses. Mr. Aulet recalled Mr. Trust as notably affable and approachable. Beloved at the center’s offices, he annually took staff to the owners’ box at Fenway Park to see a Red Sox game as he was a minority owner in the team. At the same time, he was demanding: when designing the center’s logo, Mr. Trust insisted upon multiple iterations and thought long and carefully about how the logo could communicate the center’s mission. To Mr. Aulet’s surprise, the process took months. “His attention to detail (he never forgot a number) and his stamina to keep pushing until it was perfect was beyond extraordinary,” Mr. Aulet wrote in an essay about Marty Trust. “It makes sense. If you are going to ship products to millions of people, every detail matters, and he could not only turn that focus on, but he could keep it on for weeks.”

He is survived by his wife, his sister Carol, children David Andrew Trust and Laura Beth Trust, son-in-law Alan Litchman, and three grandchildren.

In lieu of flowers, remembrance may be made in memory of Martin Trust to support The Trust Family Research Fund for Kidney Cancer at Dana-Farber Cancer Institute, P.O. Box 849168, Boston, Massachusetts 02284 or to the Diane and Martin Trust Fund for Multigenerational Programming at Hebrew Senior Life, 1200 Centre Street, Boston, Massachusetts 02131.