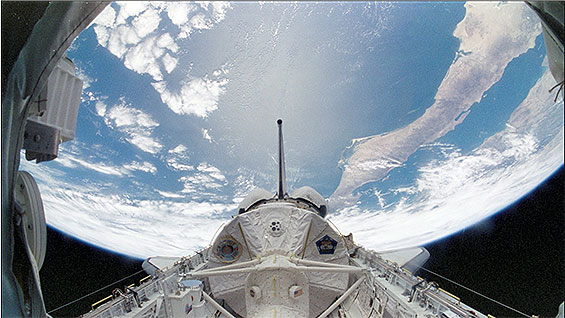 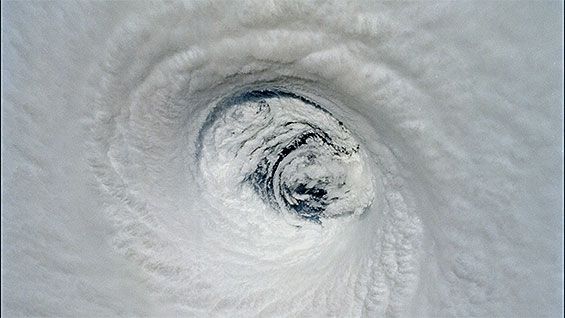 A view of the Baja Peninsula from the back of the Space Shuttle. Photo courtesy Don Thomas

Dr. Donald Thomas, a former astronaut who flew on four Space Shuttle missions during the 1990s, spoke in the Great Hall about his experiences in space. Invited by the student chapter of IEEE/ACM, he had last spoken to students on campus via two-way radio from the Space Shuttle back in 1997. On this visit, besides providing the audience with fascinating details about space travel that only an astronaut could share, he brought more philosophical elements born of his experience. 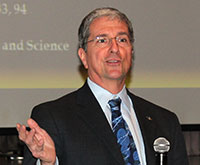 Possessed of an easy charm and a passing resemblance to the comedic actor Steve Carell, Dr. Thomas wore a charcoal gray suit and a NASA-logo tie. A native of Ohio, Dr. Thomas says he began dreaming of being an astronaut in kindergarten when he watched the television coverage of the first person in space. After getting his Ph.D. in engineering at Cornell he began his quest to become an astronaut by filling out the application that NASA releases every two to three years. Rejected three consecutive times, each time he sought out the characteristics that seemed to give accepted astronauts the edge. So he got a pilot's license, sky dove, taught at the university level and even got a job at NASA. On his fourth attempt, at age 35, he was accepted, leading to his first larger lesson of the talk: "be patient," he said.

He then walked the audience through the typical life of an astronaut, starting with the initial four years of training. He was 39 when he first boarded the Space Shuttle "Columbia" in 1994. He recalled the "butterflies" he felt when he was strapped into his seat while every person other than the seven astronauts drove three and a half miles away from the takeoff zone. Within two minutes from takeoff, he says, you are 25 miles in the air. Six and a half minutes later, for a total of 8.5 minutes ("less time than it took me to get here from Penn Station") the engines are turned off and you are traveling 18,000 miles per hour around the earth.

Dr. Thomas spoke of the experiments he performed during his four trips into space between 1994 and 1997, including examinations of the way flames behave without gravity. They form perfect spheres in the absence of colder air being drawn down into them and hot air rising. But the more quotidian details of space living brought the experience to life. "The brain quickly adapts to life in space," Dr. Thomas said, pointing out that the notion of "up" and "down" becomes relative to each person. Exercise becomes important because of the loss of muscle mass and bone density. You sleep against a wall, but straps pull you in to simulate the effect of your back resting on something. And, of course, there was the toilet, a "marvel of engineering," that uses fans to draw down the waste into a receptacle. Dr. Thomas pointed out the detailed operational procedure list posted on the bathroom wall.

Pictures of earth from outer space never get old but not many people can say they have some that they took themselves. Dr. Thomas shared views from the back of the Shuttle looking at the coast of the Baja peninsula, as well as hurricanes, dust storms and the noticeable effects of Amazon deforestation. "The blackness of space is the darkest color I have ever seen," Dr. Thomas said, "while the atmosphere of earth glows like neon."

As an astronaut, "you can see with your own eyes our impact on the planet," Dr. Thomas said. He described how viewing it from above made him feel more intensely the fragility of the earth, noting especially how thin the atmosphere is. "You get a clearer sense that we are all on this planet together" he said, describing his heightened sense of planetary-shared experience. Meanwhile he feels certain of continued manned spaceflight, including, he predicts, someone on Mars in thirty or forty years. "We will have a human space program," he said, "this is what human beings do: explore."