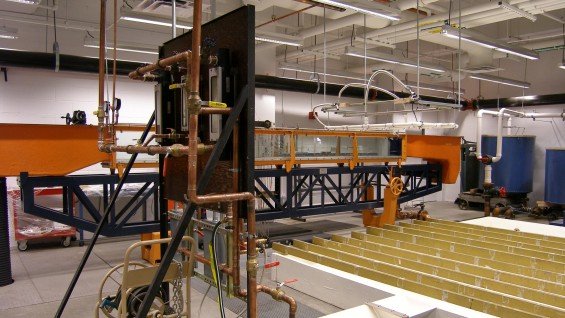 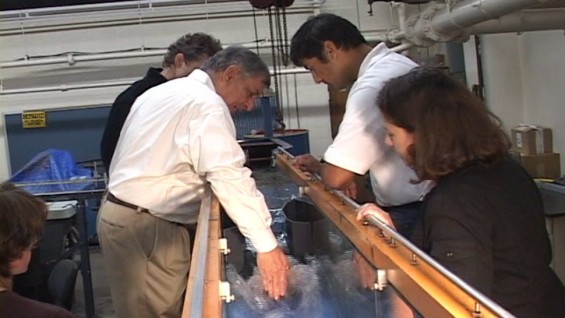 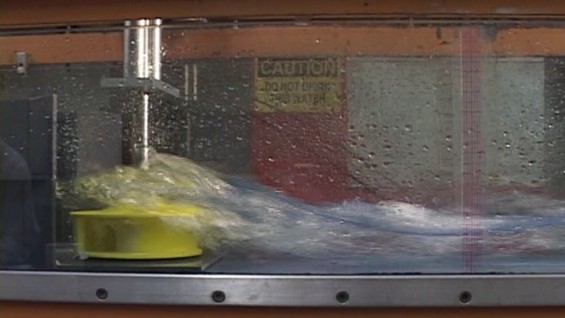 This facility is maintained to meet the program’s laboratory needs in fluid mechanics, hydraulic engineering, ocean engineering and groundwater hydrology. Specialized capabilities include: salinity intrusion measurement, dispersion and thermal plumes, and precise measurement of a complete range of flow parameters. Professor Joseph Cataldo is responsible for the development, direction and operation of this laboratory. This laboratory is used in CE 142, CE 361, CE 369, and by master’s students for their research. It contains the following major items of equipment:

Since the move to the new engineering building at 41 Cooper Square a few years ago, the scope of this laboratory has been enlarged to include green roof experiment, energy generation and improvement of  flow pattern studies in both the lake and jet experiments.

A green roof consisting of grass, soil and geotextile layers was studied in the hydraulic laboratory. This roof was 4 x 2 feet with a 4 inch roof covering. A bare control roof with the same dimensions was also studied and compared to the green roof. A rain piping system supplied heated and cold water to the two roofs. Infrared photographs were taken of the roof as the simulated rain ran off both inclined roofs. Temperatures were measured by thermistors placed along the roofs at different positions. The discharge from the green roof showed larger temperature deviations compared to the control roof.

A grid system was devised to photograph the patterns existing from the jet into an ambient wave in the large flume. The jet Reynolds number, wave amplitudes and frequencies were varied to study the water jet interaction. The dyed jet clearly is distored by the wave and lags the waves maximum and minimum amplitudes. These experiments can be used to determine pollution mixing in tidal flow. Entrainment experiments in a buoyant flume were studied in the lake. By placing dye in the ambient receiving water and tracer particles, the movement of the flume and ambient water was photographed. The Densimetric Fraude number (F) of the discharge was varied by changing the temperature of the discharge. There were over 400 experiments conducted at seven different F to study the rate of entrained ambient water into the heated flume. A linear distribution was determined to exist for the value of the entrainment velocity as related to the location and F.

During the past 5 years, a series of experiments to generate energy in a stream/river environment have been conducted  in the 27 foot flume. By confining the flow and introducing a downstream sill the flow will drop rapidly from a normal depth to a depth below the critical flow. This conversion from upstream pressure head to kinetic head is captured by a cross axis turbine. The energy was measured at the downstream contracted flow immediately downstream of the sill where the velocity is at a maximum. The energy is measured and recorded.  Values as high as 20 watts have been measured in this flume.

The undergraduate Civil Engineering students conduct a series of hydraulic experiments in the hydraulic laboratory as a required element of  CE 142 Water Resources Engineering. The students conduct experiments in pipe flow, the venture meter, turbulent/laminar flow, the hydraulic jump and pressure on gates. They determine velocities in the channel by the use of a pitot tube and construct flow nets around the gate. The students also conduct flow measurements in the laboratory jet experiment and trace the movement of a thermal plume in the lake model by the use of hot wire and laser anemometers, thermistors and dye trace photography. The thermal plume characteristics and measured in the new 14 feet long by 12 feet wide tank. This tank is equipped with thermistors to measure water and plume temperatures, hot wire anemometers to measure the water velocities, rotometers to measure inlet flows, an underwater camera to photograph water flow/dye patterns and an overhead camera to photograph streak lines. Over 60 probes can be sampled in less than one second and stored on the laboratory computer. A new laser (fiber optics) is being used to determine velocities in a neutrally buoyant jet. The position is varied in the X, Y, Z directions across the jet to study the jet velocities and re-circulations of ambient water and is recorded and processed in the computer. A hot wire anemometer and dye streak lines are also used to determine the jets dynamic behavior. The location of each data points can also be determined by the use of an X, Y, Z PM-counter (Mitritoyo).