Robert Bordo, associate professor in the School of Art, has won the fourth annual Robert De Niro Sr. Prize and its $25,000 grant for his "considerable contribution to the field of painting." Administered by the Tribeca Film Institute and named after the father of its founder, actor Robert De Niro, the award focuses on a mid-career American artist devoted to the pursuit of excellence and innovation in painting. Professor Bordo, who has taught at The Cooper Union since 1995 and leads its painting program, will receive the award in a reception on December 10. 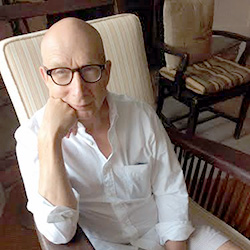 "I am honored and gratified to receive the award," Professor Bordo said in a phone call from his home in Williamsburg, Brooklyn. "I didn't know I was being considered. I got a call on my cell phone from Megan Fox Kelly, who advises the Estate of Robert De Niro, Sr., informing me I had won. Then I had to come to school. The news happily floated around in my consciousness, but the next day when I read the congratulatory email it sunk in and I was thrilled."

"What's even better about it is that the previous awardees are all my friends and are all really good artists," Bordo said. Stanley Whitney received the inaugural award in 2011, followed by Joyce Pensato and Catherine Murphy. "Stanley taught at Cooper as a visiting artist a few years ago," Prof. Bordo said. "I went to school with Joyce. I'm glad to be in a league with those other painters."

A prize committee nominates candidates and selects the winner. The members of this year's committee were Richard Flood, director of special projects and curator at large at the New Museum, Thelma Golden, director and chief curator at The Studio Museum in Harlem and Lindsay Pollock, editor-in-chief at Art in America Magazine.

"Robert Bordo’s palette is unique," Richard Flood wrote in a statement accompanying the prize announcement. "The colors are poured into paintings that hover calmly between the representational and the abstract, refusing to relax into either genre. If beauty and unease are polar extremes in Bordo’s work, there is also humor mostly directed at his profession and the world in which it is practiced.”

What will Professor Bordo do with the prize money, which comes with no strings? "It will go back into the studio," Bordo said. "It's an award for painting. So the assumption is it will go into the work. But it will also help pay for a trip to Peru and a hike to Machu Picchu in June."