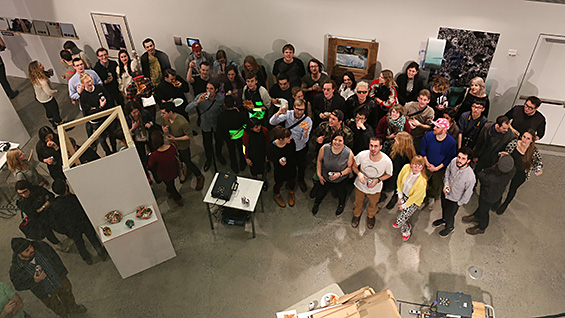 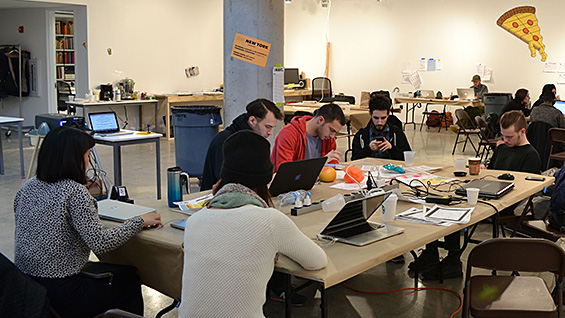 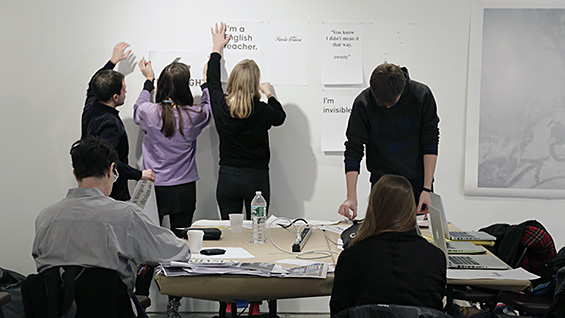 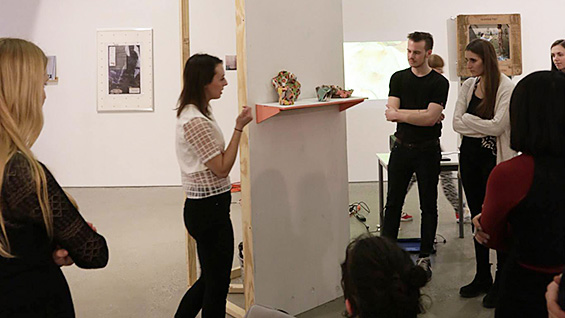 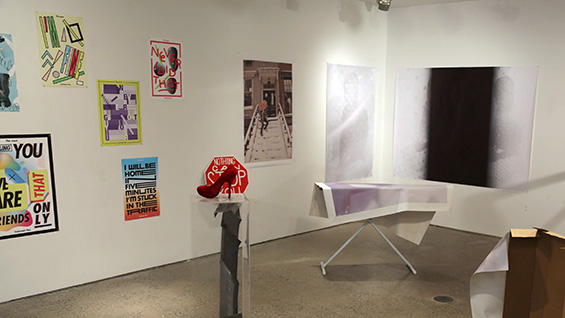 The participants of NEO New York at the culminating exhibition. All photos courtesy NEO New York

While snow flakes the size of quarters filled the streets during one of several February storms this year, downstairs at 41 Cooper Square the gallery had a warmer feel to it. Music played. People sat at large tables covered in brown butcher paper and chatted or peered into laptops. German could be heard being spoken. One person obligingly let another cut her hair. The walls were turned into pin-up spaces with graphical works-in-progress including one covered in colorful post-it notes indicating a thought process, a work of art or both. The space felt like a cross between an international youth hostel and a downtown design studio. Welcome to NEO New York: Visual Thinking. Would you like a cup of coffee or tea?

NEO New York, a week-long event of professional-led workshops, a lecture series and a culminating exhibition, ended on February 15th. Two School of Art seniors, Troy Kreiner (the force behind the Do Good Green-Wood exhibition) and Rachel Mendelsohn, began putting it together over the summer. "The origins of NEO New York are workshops like this that I have done abroad in Germany, London and Greece," Troy Kreiner said during a chat with the organizers prior to the event. "They all had different things to offer, but there was this similar thread which was international, young, creative people willing to learn and work with those they never met before." 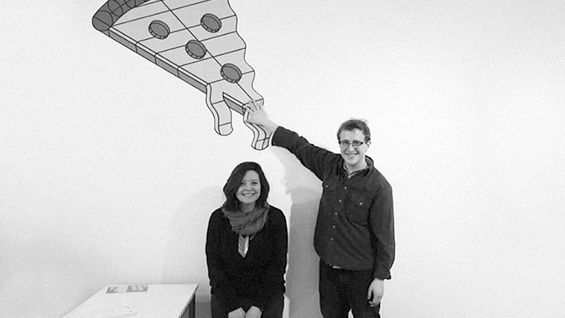 At NEO New York's core were five workshops, each led by a local artist or design professional. "The workshops are interdisciplinary. So some come from a design background, performance, websites, painting and photography--very similar to how Cooper Union's School of Art is organized," Kreiner said. Participants were capped at 30 total, and each had to submit a digital portfolio and letter of intent for vetting. Demand was high because it was being offered free of charge, a hallmark of such grass-roots learning experiences.

"The inspiration for the whole workshop is what's going on at Cooper," Kreiner said. "We wanted to open the doors of the Cooper Union and let people in before it becomes more difficult considering the recent reduction in the scholarship. And there is a way of doing it by putting your best foot forward. Good energy, good work and share the wealth." Such workshops first appeared in Europe and continue to be popular there, Kreiner said. NEO New York looks to be a vanguard in introducing the concept in the United States. Many of the participants in NEO hailed from Europe, in spite of the airfare costs. 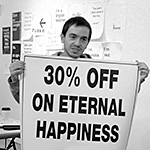 Francesco Corsini, originally from Florence, Italy but studying graphic design in London, dropped everything to come to NEO. "I spoke to my professors before applying, and they agreed with me that I should just go and have this experience," he said shortly after a portfolio review had wrapped up. "It's working really well. It's the first time in New York for me. It has been quite intense. I am working with Paul Sahre [a graphic designer]. Yesterday he took us to his studio. The whole workshop is about lying. How do you represent lying and tell a convincing lie. It's been really interesting and a change from thinking about how to make a very nice, slick final outcome."

"Each of the workshop leaders developed a lesson plan for their specific group," Rachel Mendelsohn said. "So whatever they determine the students should be working on they can, but there is no limitation to what they do." Workshop leaders, who received a small stipend thanks to a Kickstarter campaign, also included digital artist Maja Cule, the trend forecasting group K-Hole, cultural producer Jake Yuzna, and artists Alexandra Gorcyznski and Marisa Olson. A lunchtime guest lecturer series, open to the public, drew the workshops together. 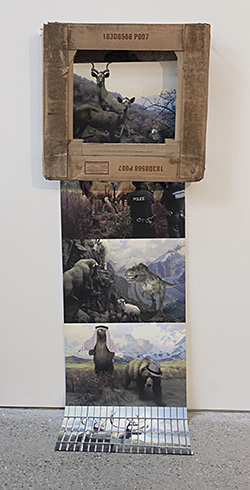 Workshop participants included professionals, too. Rori Gold, a graphic designer working in New York since 2006 had just quit her job three weeks prior to attending NEO New York. "This is a springboard for getting back into more personal stuff," she said. Her workshop, led by Alexandra Gorcyznski, focused on using the iPhone as a studio, creating work exclusively from apps. "It limits you but we share apps that we found, and it makes you think about art in a different way, especially if you are from a more traditional fine arts background," Gold said. "One of things I loved about art school was the critiques and people sharing ideas. So I love the communication. Coming here makes me realize that being around other artists is really important. It pushes my work."

The workshops culminated in a final exhibition of their efforts on Saturday, accompanied by selections from The Herb Lubalin Study Center of Design and Typography. "We mix artifacts with personal objects, blurring the line of personal creative art and academic archive materials," Kreiner said. The NEO New York organizers also put together a book of essays and artwork contributed by workshop leaders and others on the theme of “Visual Thinking.” In keeping with the generous spirit of the event, the book was printed, saddle stitched and given away for free to all who participated. It can also be downloaded by anyone. 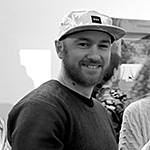 But why call it "NEO?" It turns out to be part of a long-term strategy. "It started off as a play on words," Kreiner said. "There are so many meanings to being 'new.' And then adding another terminology of being new, 'Neo New,' so it's kind of falling on itself, like 'New New.' And we used that for our identity. So we would use this prefix in another place like NEO New Mexico or NEO San Francisco. So it is strategic but it's also conceptually where we are at."

"From the get-go, we felt like if we can facilitate the first iteration of this thing, it would continue either at Cooper, because we have a connection here, or in other cities," Rachel Mendelsohn said. "The workshops we are modeling it after are commonplace in Europe. But they don't exist here. So if we could create a network of creative workshops here, that would be awesome."

"I've had some really magic moments here," said Sebastian Zimmerhackl, from Frankfurt, Germany, and a veteran of such workshops. "It's about getting together and building bridges and having connections. Friendly people. Good talk. It's small things. The acoustics of the saxophone in the subway. You cannot download that.”