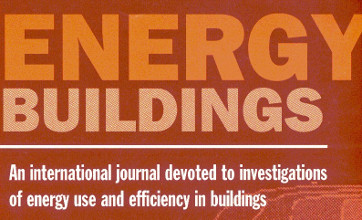 Professor Joseph C. Cataldo has co-authored a paper on green roof thermal buffering published in the Energy and Buildings journal.

Thermal buffering of the 27,316 m2 Jacob K. Javits Convention Center Green Roof (JICC Green Roof) was investigated in the field, as well as in the laboratory in order to determine its ability to insulate a building. An instrumented replica of the green roof cross section was developed to elucidate the inner-workings of the system. During the course of a year a total of twelve field monitoring campaigns were conducted to measure temperatures with 249 images collected at sixteen different locations(eight exterior and eight interior). During this first sequence of measurements, the north green roof had already been completed, while the south green roof was gradually being installed. Additional field imaging was performed on two separate days in August (on 08/08/15, 08/22/15), and on one day in January (on 01/22/16) between sunrise and sunset(generating an additional 850 images). To isolate the thermal performance of individual components of the roof structure, a physical model of the roof was constructed in a laboratory, instrumented with thermistors, and subjected to a heat lamp. A one-dimensional heat conduction model was used to investigate physical relationships revealed by the field and laboratory observations, and represents the experimental data well. The results indicate that the construction of the green roof significantly reduces heat flux through the convention center roof. The mean internal and external temperatures on the north and south sections of the roof on the first monitoring day (when the north green roof was complete, but the south green roof had not yet been installed) and the last monitoring day (when both north and south green roof sections were complete) are provided to support the insulating value of the green roof layers. The mean exterior temperature on the south roof on the first day of monitoring was 53.9 o C and 37 o C on the north roof. The mean exterior temperature on the south roof on the last day of monitoring was 24 o C and the north roof 28 o C.