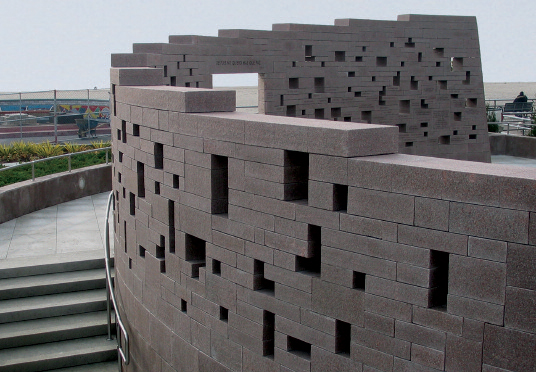 Situ Studio was founded by Sigfus Briedfjord (AR’05), Basar Girit (AR’05), Aleksey Lukyanov (AR’05), Westley Rozen (AR’05) and Bradley Samuels (AR’05) after graduating from The Cooper Union’s Irwin S. Chanin School of Architecture. In its first two years Situ Studio has worked on a wide range of projects for both public and private clients. Among its first projects was a collaboration with artist Freddy Rodriguez on a memorial to the victims of American Airlines Flight 587, which crashed in Belle Harbor, Queens in 2001. Situ Studio and Mr. Rodriguez were awarded the project after winning a City sponsored design competition held in the summer of 2005.
The challenge of this site/project was to create a quiet space for contemplation within Rockaway’s busy and heavily trafficked commercial center. Oriented toward the ocean beyond, an arcing granite wall sits atop an elevated plinth surrounded by planters and nine pear trees. The vegetation serves as a screen separating the visitors from passersby. A series of voids in the wall frame views of the water and sky and provide places to leave flowers and mementos in honor of loved ones. The names of each of the 265 victims are inscribed on the surface at various heights and a single threshold cuts the wall at is center. At exactly 9:12 am each year, on the anniversary of the crash, sunlight passes through the threshold and aligns with the pattern of paving on the ground. 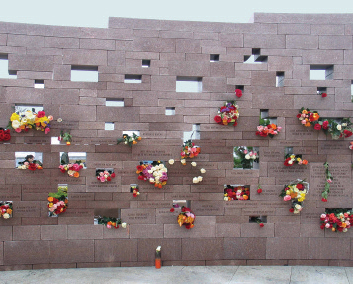 With the plane en-route to Santo Domingo, many of the passengers on the flight were of Dominican descent. The tragedy, the second largest in U.S. aviation history, brought together New York’s Dominican community and the residents of Belle Harbor. On November 12th, 2006 the Flight 587 Memorial was dedicated in a ceremony honoring the fifth anniversary of the crash.