Sherrod Brown, the senior senator from Ohio, spent the past ten years writing DESK 88: Eight Progressive Senators Who Changed America, which tells the story of eight of the previous occupants of the wooden desk where he has sat since being elected to the U.S. Senate in 2006. Despite their flaws and frequent setbacks, each made a decisive contribution to the creation of a more just America. Sen. Brown shares these stories in conversation with Cecile Richards in an event co-sponsored by The Strand and The Cooper Union for the Advancement of Science and Art.

Admission Options: The event is free and open to the public. General public should reserve a space. Please note seating is on a first come basis; an RSVP does not guarantee admission.

You can reserve a copy of Desk 88 to pick up at the event at http://bit.ly/strandbrowncu. Please note that payment is required for all online event orders at the time of checkout.

Brown’s predecessors at desk 88 range from Hugo Black, who helped to lift millions of American workers out of poverty, to Robert F. Kennedy, whose eyes were opened by an undernourished Mississippi child and who then spent the rest of his life afflicting the comfortable. Brown revives forgotten figures such as Idaho’s Glen Taylor, a singing cowboy who taught himself economics and stood up to segregationists, and offers new insights into George McGovern, who fought to feed the poor around the world even amid personal and political calamities. He also writes about Herbert Lehman of New York, Al Gore Sr. of Tennessee, Theodore Francis Green of Rhode Island, and William Proxmire of Wisconsin.

Together, these eight portraits in political courage tell a story about the triumphs and failures of the Progressive idea over the past century: in the 1930s and 1960s, and more intermittently since, politicians and the public have successfully fought against entrenched special interests and advanced the cause of economic or racial fairness. Today, these advances are in peril as employers shed their responsibilities to employees and communities, and a U.S. president gives cover to bigotry. But the Progressive idea is not dead. Recalling his own career, Brown dramatizes the hard work and high ideals required to renew the social contract and create a new era in which Americans of all backgrounds can know the “Dignity of Work.”

Sherrod Brown is the senior United States Senator from Ohio, elected to his seat in 2006. He was the U.S. Representative for Ohio’s 13th congressional district from 1993 to 2003 and the forty-seventh Secretary of State of Ohio from 1983 to 1991. A member of the Democratic Party, Senator Brown began his political career in 1975 upon election to the Ohio House of Representatives. 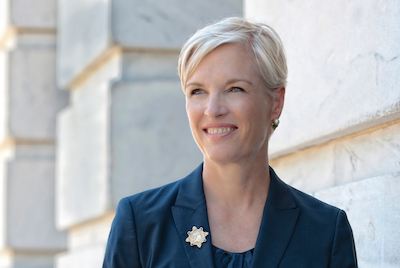 Cecile Richards is a nationally respected leader in the field of women’s health, reproductive rights, and social change. She began her career helping garment workers, hotel workers, and nursing home aides fight for better wages and working conditions. After years in the labor movement, she moved back home to Texas to help elect the state’s first Democratic woman governor: her mother, Ann Richards. She went on to start her own grassroots organizations, and later served as deputy chief of staff to House Democratic Leader Nancy Pelosi. In 2011 and 2012, she was named one of Time magazine’s 100 Most Influential People in the World. For over ten years, Richards served as president of Planned Parenthood Federation of America and the Planned Parenthood Action Fund. She is a frequent speaker and commentator on issues related to women’s rights and activism. Richards serves on the board of the Ford Foundation. She and her husband, Kirk Adams, have three children and reside in New York City.