The great French avant-garde artist Marcel Duchamp once said, “I am interested in ideas, not merely in visual products.” Indeed, one of the goals of the 20th century avant-garde project has been the reintegration of art into social life, by using everyday materials to which anybody could have access (one of Duchamp’s most famous pieces, “La Fontaine,” was a signed urinal). In effect, the ideas behind the object were just as important a part of the artwork as the object presented. This vein of thinking courses through the work of Cooper graduates Ryan and Trevor Oakes. The Oakes brothers have actually taken the Duchampian mandate to a whole new level. They don’t just integrate art and the every day objects of life—they systematically explore how human anatomy itself predetermines the way that art looks. Ryan Oakes (A’04) describes this as a “nonconscious generation of form,” in combination with “consciously trying to mimic the way space appears to the eye,” adds Trevor Oakes (A’04).

The 26-year old brothers are identical twins, though it is more their mannerisms and turns of phrase that mark them as such than their looks. Their basement studio is off Irving Place in Manhattan. To enter, you must duck through a low stone archway, almost as if entering a cave. The studio is a small, tidy room that contains a long worktable, flanked by  two bunk beds on the right and a small kitchen at the far end. On one wall are a couple of Ryan’s abstract paintings, and on the molding above them hangs a sculpture made by Trevor from blocks of corrugated cardboard, through which you can see. On a window ledge near the kitchen are some languid, vegetal sculptures that look like they are straight off a coral reef; on closer inspection, you can see that they are made of pipe cleaners. A brick red half dome constructed from thousands of matches sits on the table, looking rather like a sea urchin. On either side of the table there are cityscapes of Manhattan drawn on concave surfaces. What look like two gigantic skeletal metal helmets, that are actually concave easels, lie on a small couch behind the table. In fact, the whole space feels like an underwater world because of the organic, abstract nature of the work. 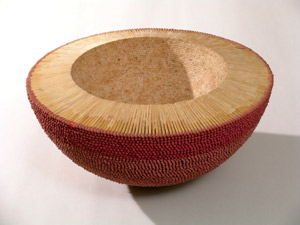 The brothers note that other people have made this connection before, but they didn’t intend for the works to turn out that way. Rather, these pieces are all the results of two related ideas: the fact that human vision functions as a center point to experience, and, because of our anatomy, we read the world spherically—and this quite literally affects the way art looks. “Your entire life,” says Ryan, “the world you see comes to you from the spherical formation of light rays.” In fact, one of their sculptures is a perfectly globular, silver map tack, perhaps a quarter of an inch in diameter—the twins feel that this everyday object is a perfect representation of the idea of the eye as center point. As Trevor explains, “The map tack is reflective, so if you stand close enough to it, you can see yourself, and you can hypothetically see the whole room. A light ray from every part of the room is traveling to this map tack, so there is this density of information. [If this] symbolizes the human eye receiving information, the translation mechanism would be the brain. All of the works in the room are the concrete manifestations of these two ideas; they all either start out as center points, like the coral reef pipe cleaner pieces, the map tack, the abstract paintings and the matchstick sea urchin, or they depend upon being seen from a center point, like the undulating cardboard sculpture and the cityscapes.”

Ryan and Trevor’s fascination with nature, art and science started early on. The brothers moved a lot as children, mostly within the United States. They were born in Boulder, CO, but also spent several years in Wisconsin, Virginia and West Virginia, and a six-month stint in Scotland. Their mother, a professor specializing in children’s and adolescent literature, kept looking for the perfect job, which brought them to each successive place. Their father, a social worker, happily found work in each new situation. In all the places that the family lived, there was plenty of outdoor space as well as a playroom fitted out with everything a child might want to feed his creative imagination. Television was not allowed, leaving a great deal of time for exploration. Not surprisingly a major childhood question was “how does the world work?” 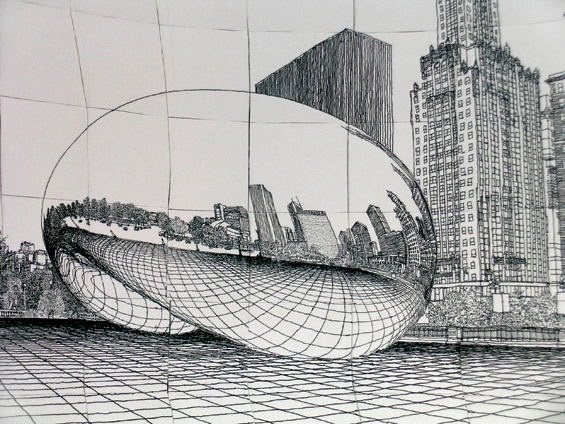 So, from an early age, science—the natural world in particular—and art were linked in the twins’ minds: “We used art as an investigation of the physical world,” says Trevor. Their art, at times, follows the scientific process: come up with a hypothesis and then test
it; refigure it if it fails, and work on it until you get something failsafe. Other times it is
blind experimentation. During their junior year in high school, Ryan and Trevor attended a portfolio day where many colleges and universities, including Cooper Union, had tables recruiting for potential students. “We got really positive feedback from Cooper Union,” says Trevor. “And a professor named Don Kunz, who recently passed away, encouraged us to apply for early admission.”

Ryan adds, “That was the first time getting accepted seemed like a possibility because it was thought of as a very difficult school to get into. But because of Don Kunz, we applied with confidence.” They both were accepted, and both chose to go—a choice that they are very pleased about.

“Cooper Union was excellent,” says Ryan. “It gave us four years to explore our own ideas.” “You can’t ask for more than that,” adds Trevor. At Cooper Union, they started to seriously investigate the way in which the human eye makes sense of the complexity of information which speeds towards it. Therefore, both Ryan and Trevor integrated stable center points and elements of the unpredictable into their work. They let their chosen medium lead them. Ryan stands up and gestures toward one of his paintings. “My paintbrush is the center point,” he says. “These paintings explore form, and I let the point being generated by the brush guide the overall arrangement of that form.” Interestingly, this led Ryan to start to make his own paintbrushes, so even if the form of the image wasn’t controlled, the form of the center point was. “I was making them out of really durable felt and twisting them or knotting them in some way that had a logic—it absorbs a lot of liquid and dispenses it in a controlled manner.” The images are a series of marks that start out darkly and become lighter as the ink is used up. “These forms would come out of it,” he continues. In fact, his personalized brushes create a language of marks; as he explains, “the brush has its own innate vocabulary, and you just have to discover it.” 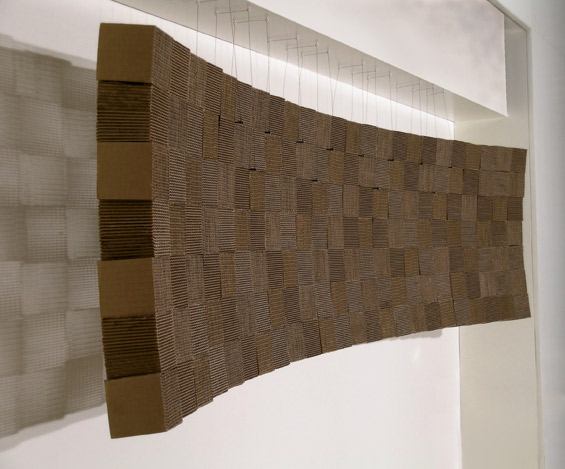 Trevor followed a somewhat similar process in creating his corrugated cardboard sculpture. “I didn’t realize it was going to do that optical thing,” he laughs. “It took a long time to build and so I had a lot of time to think. Eventually I realized that I’d be able to see through it. And then I thought about building a whole curved wall, so that the spaces inside the corrugation all point toward one spot, and the sculpture would become almost invisible if the viewer is standing in that spot. This really acknowledges that you’re looking at the world through a sphere, because you can only see through it if it’s curved so that the visual information can get to your eye through the openings.” In other words, the invisible sphere that represents our range of vision is made concrete in this sculpture. But the real moment of insight, which would eventually lead to the curved cityscapes, came when the twins thought about how our eyes by their very nature see a split image—two eyes, two image —which the brain combines into one. Trevor holds his index finger up about six inches in front of his face. “When I’m looking at my finger,” he says, “each eye is taking in a different image of the finger, but by focusing on it, the images overlap perfectly and I see only one finger. If I focus on something in the distance, it splits into a double image and I see two fingers, because I’m no longer setting my sight lines on my finger.”

When the brothers realized this, they understood that they could take advantage of the dual nature of sight to create perfectly captured images. They saw that if they positioned a blank piece of paper so that only one eye could look beyond it, the brain would attempt to “see” the part of the image that was blocked, and a ghostly image of the scene would appear on the paper, from which a perfect replica could be drawn. To keep the images from distorting, they invented a curved easel to support spherically concave paper so that every point on the papers surface can sit an equal distance from the artist’s eye. As one of the brothers finishes drawing the image in minute detail along the paper’s margin, the other cuts the strip of paper off, leaving a new blank margin ready for the next part of the image. 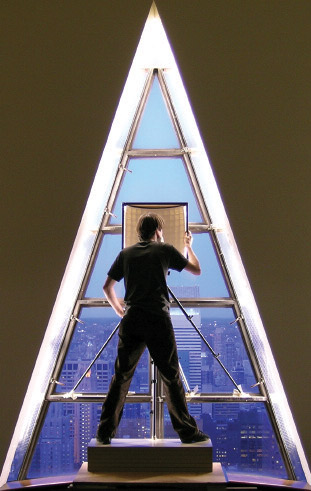 This was the birth of the cityscapes: New York City, with its hard rectilinear lines, was the ideal subject matter for this technique. The cityscape that they have displayed in their studio has 55th street as its main axis, looking west toward the swell of skyscrapers in Midtown and beyond to the Chrysler Building in the distance, on the upper left corner. Mary Ruokonen, Director of Financial Aid at Cooper Union, having seen this image, thought it would be an interesting idea to draw the view from the Chrysler Building. As luck would have it, Cooper Union owns the Chrysler Building, and so the twins were able to get permission to make a drawing from the top floor.

Whether exploring the precise form of uncertainty to quite literally drawing the world as the eye sees it, Ryan and Trevor Oakes draw our attention to the actual act of seeing. But more than that, by drawing attention to how we see, they also point out that the way we represent our world is an accident of anatomical destiny—life and art really are intertwined. In effect, the Oakes brothers are saying that it is quite literally in each and every one’s nature—anatomically, scientifically—to see art in the world around us. Duchamp would have been proud.

Ryan and Trevor Oakes’ cityscapes will be shown in “Double Vision,” an exhibition this autumn at The Spertus Institute of Jewish Studies in Chicago, where they will also be on a panel during the Chicago Humanities Festival with art historians Lawrence Weschler and Jonathan Crary.