Alyssa Davis, a sophomore at the Albert Nerken School of Engineering, went to a fair this summer, but not of the usual kind.  She attended the Reinvent the Toilet Fair, in Seattle, sponsored by the Bill and Melinda Gates Foundation, after her family-inspired Ghana Sustainable Aid Project (GSAP) received a $100,000 grant from them.  It was just part of a whirlwind summer that also had her being handed an award in Austin, Texas by apl.de.ap, a member of the pop group The Black Eyed Peas.  Both events were a product of the non-profit work she has been doing along with her sister and grandfather implementing environmentally sustainable micro-flush toilets targeted at poor communities in the developing world. 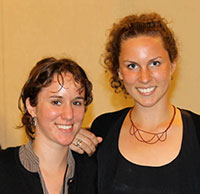 “My sister, Hannah Davis [left, in photo, with Alyssa at right], started the program when she was still an undergraduate at New York University studying international development in 2007,” Alyssa says.  Originally focusing on literacy and female empowerment in Pokuase, Ghana, a suburb of Accra on the Southern coast, Hannah changed the direction of her work there in 2009.  Seeking a way for the project to become self-sustaining she sought out community input on what it needed the most and would work as an on-going business.  The answer was toilets, due to local sanitation challenges, and jewelry, an already-established local industry.

“Honestly when she first started I just wasn’t into the whole aid thing,” Alyssa says. “But when she invited me to join the jewelry project I said, ‘at least it is something I am interested in.’ ”  The GSAP works with local Ghanaians making jewelry designed by Alyssa as a way to fund the toilets.  But it is the toilets that have been getting all the attention, including a $100,000 Grand Challenges Explorations Phase I grant from the Bill and Melinda Gates Foundation in 2011.

Determining that a key to success would be using indigenous technology, the GSAP partnered with a local Ghanaian toilet manufacturer who had an established environmentally sustainable model, called a Biofil Digester. “They work like the decomposition found in nature - on forest floors,” Alyssa says, “They use micro and macro organisms, one being earthworms, that feed on the waste. After 2-3 years, the contents can be harvested as pure fertilizer.” 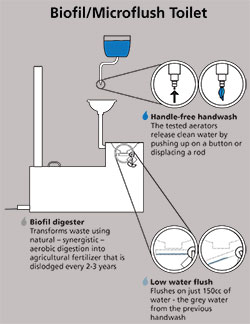 The GSAP added a micro-flush valve co-invented and patented by Alyssa’s grandfather, Steve Mecca, a physics professor at Providence College in Rhode Island, where Alyssa grew up.  Placed at the bottom of the toilet bowl, the valve serves a dual purpose. Not only does it isolate the amassed waste from the point-of-contact toilet space, it also collects the hand-washing water of the previous user, using the small amount of so-called graywater to flush.  “It brings the same level of dignity that toilets which flush all the way out of the house have, but without the added cost” Alyssa says.  The water can be collected by harvesting rainwater.  Electricity for lighting comes from solar energy.

The Gates Foundation grant funded single-family prototypes as well as the creation of a ten stall prototype public bathroom, designed by Alyssa, attached to a school in Pokuase.  “It’s very much in line with off-the-grid sanitation design that works for the developing world,” Alyssa says.  “Perhaps even in the future it can be used as reverse innovation to affect how we much water we use here and hopefully cut down.”

Alyssa, 23, graduated from Parsons the New School for Design a year early in 2010 by “cramming” her last two years of study into one, majoring in design and management.  “It’s kind of a holistic business degree is how I like to put it,” Alyssa says.  She then took a year to work in Ghana with her sister, focusing on the design needs of the project.  But it was the engineering challenges that intrigued her.  “The work at Parsons was not hands-on in terms of constructing anything or prototyping” she says.  “I really wanted to get the technical skills.  I felt like I could have understood so much more rather than just doing the design work.”  So she applied to Cooper, and only to Cooper, to be part of the Bachelor of Science in Engineering (B.S.E.) program.

Besides attending the Gates-sponsored toilet fair over the summer, Alyssa and her sister received an award in Austin as part of the Dell Social Innovation Challenge.  A semi-finalist in the annual competition sponsored by the computer manufacturer, the GSAP received the HOPE Video Award on stage with The Black Eyed Peas pop star for the video they created in support of their work.

Going forward, the GSAP is now partnering with service organizations, other NGOs and even Peace Corps volunteers to identify local tradesman interested in creating a local toilet enterprise.  They aim to make the critical components used in construction lighter, more transportable and less expensive so that the toilets are accessible even to the poorest of the poor.

How have the toilets been received? “The local people love them.  Families owning the single stall prototypes will never go back to the disgusting public latrines,” Alyssa says. “And the school kids are really excited. They rush in before the end of the school day when it gets locked up for the night.”