Professor Gersten served as co-designer for the “Stone House,” the first of Skywater’s Community Centers. Incorporating water catchment, organic gardens and an education and resource center, the Stone House was constructed for LEED Gold Certification.

Later this year, the Paris-based publisher Editions Firmin-Didot will release Hunting Life: A Forever House, a collection of drawings and writings by Cooper Union professor David Gersten. Hunting Life explores the idea of community through architecture and literature, presenting its structures in detailed drawings and depicting its inhabitants in over 100 short stories. The large-format (17 x 24-in.), four-volume set is the product of over two decades of inquiry and development, beginning when Gersten was a student at The Cooper Union.

Under Dean John Hejduk, Gersten began his thesis in architecture in 1990. Starting with a foundry worker and eventually expanding his inquiry to include 22 unique disciplines, Gersten developed the program of his community, creating what he calls “a constellation of architectural and literary spaces manifesting an internal logic of structure, program and persona.” The protean nature of such an undertaking is unsurprising, given the breadth of Gersten’s experiences and academic pursuits. Growing up in Albany, NY, Gersten spent 10 years working in the family business—a custom truck and tractor-trailer fabrication shop. (Founded in 1896 by Gersten’s great-grandfather, J. Becker and Sons originally built wagons and sleighs.)When he first came to New York City at the age of 18, Gersten studied at the New York Institute of Technology. He would later study aesthetics and phenomenology at the New School for Social Research and take courses in Islamic studies at the Jewish Theological Seminary. 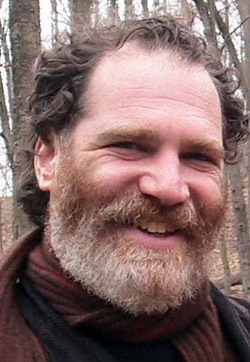 Today, at the age of 43, Gersten has been a part of The Cooper Union community for more than half his life. Since joining the faculty at The Irwin S. Chanin School of Architecture in 1991, he has taught at every level of the program. From 1998 to 2001, he was the associate dean of the School of Architecture, also serving as acting dean after the passing of Dean Hejduk in 2000. Gersten currently directs the first-year Design Studio, teaching Architectonics, in which students examine machines and tools as a link between material, task and human physiognomy. In the past, his students have explored a diverse set of topics: for a few years, they worked with water tanks and invented an “architecture of buoyancy;” another year they studied Hamlet and his relationship to the Globe Theatre.

Gersten also teaches an advanced concepts seminar entitled “A Material Imagination of the Social Contract,” in which students examine global capital, financial instruments, technology, social issues, language, poetry, ethics and space. Grounded in the belief that each of the creative disciplines affords distinct modes of thinking and acting, the seminar discussion is in many ways an extension of Gersten’s studio practice. “For many years my work has focused on how disciplines transform, and are transformed, by the world—and more specifically, on the role of the creative imagination as a cultural and intellectual force in these transformations.” Teaching and working in his studio at The Cooper Union,Gersten benefited from a continuous exchange with Dean Hejduk, calling the inspiration and guidance that Hejduk provided immeasurable. “We would exchange the latest ideas, works, drawings and stories on a weekly basis,” he says. “It was magnificent.”


“This community has been my creative home for more than two decades. I am deeply grateful for the honor of participating in such a wonderful and unique place.” Outside of The Cooper Union, Gersten has been a visiting professor at universities in the U.S. and abroad, including City University of New York; Rhode Island School of Design (RISD); Universidad Politecnica de Valencia in Spain; Universidad Andina Simon Bolivar and Universidad Privada de Santa Cruz in Bolivia; and Universidad Catolica de Cordoba in Argentina. He has also lectured at Harvard, Yale, RISD, Parsons School of Design, McGill University, the Canadian Center for Architecture and the Cranbrook Academy of Art. His work has been the subject of exhibitions at The Cooper Union, RISD, the University of Virginia and the Whitney Museum, as well as in Romania, Bolivia and Chile, and is held in the collection of the Canadian Center for Architecture. 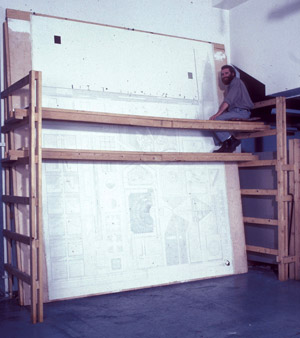 Currently, Gersten is the managing director and creative director of Maimar, LLC, a Texas-based land development, management and programming company he founded along with Cooper Union alumnus Arman Biglari (AR’91) in 2003.With a focus on sustainable growth and the relationship between communities and their environment, each of Maimar’s projects are developed and reviewed in terms of design, programming, community integration, environmental and regional impact, financial structure and risk management. “The company brings together finance industry workers and architects, landscape architects,  and planners and water and energy managers—people who all share the belief that land development and use is a form of stewardship of both the land and the community that lives there,” says Gersten. “After examining how financial instruments function in my seminars, it has been fascinating to be involved in the implementation of projects at this scale.”

The company is currently working on multiple projects just west of Austin, TX, including Crossroads, a 120-acre regional medical campus, and Skywater, a 1,600-acre environmentally focused residential community. At Skywater, in addition to being on the development team, Gersten co-designed the Stone House, the project’s community center, in collaboration with Biglari and Tim Blonkvist of San Antonio-based Overland Partners. Gersten has been recognized over the years with the American Institute of Architects Scholastic Award and the Matthew W. Del Gaudio Memorial Award from the New York Society of Architects.

An exhibition in Sibiu, Romania, entitled “House for Andrey Tarkovsky” won the Maria Prophetissa Award. In 2000, the Graham Foundation for Advanced Studies in the Fine Arts awarded Gersten a grant which fostered the further development of Hunting Life. Maybe best described as a drawn novel, telling the story of a community in words and spaces, Hunting Life is also an exhibition. Volume one contains small versions of the drawings augmented by keys in seven languages, maps of the entire community’s program, introductions and all of the project’s short stories. Volumes two, three and four contain full-scale reproductions of the eight drawings—divided into multiple pages, the drawings can be unfolded and combined to reproduce the originals (the largest is 120x168 in.). Gersten’s hope—and the hope of publisher Charles Firmin-Didot—is that the full-scale drawings will be unfolded, assembled and exhibited on a wall while the stories are read.

“In some ways,” says Gersten, “this work started with a relatively simple question: ‘What if the spatial programs of architecture were considered as a literary condition—how could the nuance and texture of the stories of our lives manifest into our shared spaces?’ As this question grew in many directions, it introduced all the enigmas of language, space and life.”