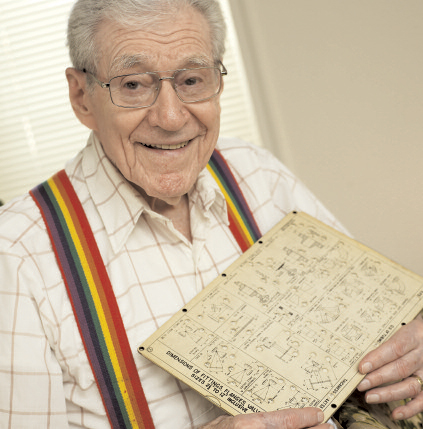 Harold Hesselson (AR’35) lives a life guided by love of country and his fellows—an unsung hero. Hesselson is not unique in his patriotism and sense of gratitude, but his civilian contribution to the Navy was particularly notable for its life-saving effects. Upon graduating from The Cooper Union, Hesselson began work at the Piccatiny Arsenal in New Jersey, as an engineering draftsman on Naval projects. Hesselson applied for and finally received a transfer to the U.S. Naval shipyards in Brooklyn. He was appointed associate marine engineer and worked with Navy Yard crews reviewing blueprints of badly damaged warships returning from Pearl Harbor. Hesselson looked for a way to develop a faster, more efficient means to bring together all the many complicated calculations needed by Navy shipyard crews.

By 1941, Hesselson developed a prototype for the first slide rule ever used by the Navy. His slide rule gave Navy shipyard crews “…a rapid method for securing pertinent standardized dimensions of high pressure steam and feed fittings, valves and flanges.” By 1942 the Navy shipyard crews had totally revised their repair schedules through the use of Hesselson’s invention. Senior naval command requested 100 slide rules be produced as quickly as possible, a feat Hesselson managed by handcrafting his ingenious tool, after regular work hours, in the Navy Yard machine shop. Rear Admiral F.E. Haeberle noted in his 1946 commendation and award to Hesselson that the slide rule “…greatly simplified the arduous and time consuming task of referring to multiple booklets, charts, handbooks and data sheets, to repair Navy fleets.” Hesselson was further recognized for his initiative, interest and ingenuity in developing a tool that saved the Navy time, money and the lives of sailors sent out to defend their country.

Hesselson joined Celanese & Nabisco in New York as a senior piping designer at the end of the war. His naval experience had set him on a singular path of becoming one of the nation’s premier piping designers. Hesselson joined Scientific Design in 1954, a subsidiary of Halcon. As the company’s senior piping designer, Hesselson guided Scientific Design’s creation of their client’s machine manufacturing layout plans involving the transportation of viscous liquid, air and water. Upon retirement in 1978, Hesselson was invited to teach at the American Council for Émigrés in the Professions in New York City. At 94 and a widower, Hesselson lives in New York City, surrounded by his loving family and the memories of his extraordinary professional contributions to his country, a true Cooper Union pioneer.