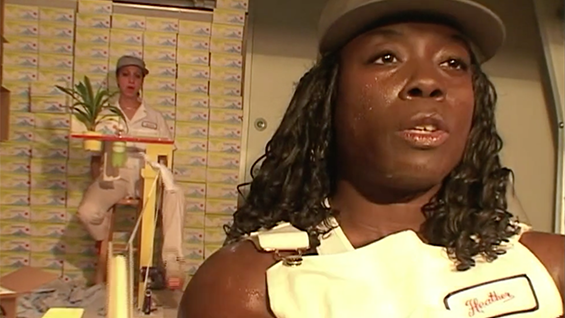 I’ve been a student at The Cooper Union School of Art since 2012, and this past fall was my first semester as a teacher assistant in the Outreach Pre-College Program. I TA’d the critical thinking and creative writing class, Contemporary Art Issues, that accompanies the program’s intensive portfolio preparation curriculum. In this class the students develop an ability to discuss art with confidence.

What's really exciting about being a T.A. for the Contemporary Art Issues class is that we not only work alongside the professors but we’re also invited to propose curricula and lead the class discussions. Our team of four would meet weekly to reflect and develop that Saturday’s class. By making sure the curriculum was open and in conversation we were able to take into account the student's interests and which methods of reflection suited the group best.

This collaborative approach to teaching critical thinking received my proposed curriculum with open arms, and it was so exciting to see it grow in conversations and responses. We based each class around an artwork that addressed issues of performing labor and producing labor. We also considered the conflictive relationship towards authorship and who gets to claim it when it comes to identity.

We began by looking at Mika Rottenberg’s imaginative supply chain landscapes and considered the relationship its workers had to the workers in the films of the Lumiere brothers. We then reflected on the factories that build the smartphones we carry around in our pockets every day, through the poetry of Xu Lizhi, in relation to the factories producing the internet’s software and content through the work of Andrew Norman Wilson. Considering our role as front end users of the Internet, we read Laurel Ptak’s Wages for Facebook manifesto and had riveting discussions about content ownership within web 2.0 corporate environments like Facebook. Through the poetry and digital images of Juliana Huxtable we opened up a conversation about the ways in which visibility is a primary capital within emerging social markets. Her involvement in New York City’s art world and nightlife, and her unabashed use of her Internet presence as part and parcel of her artistic practice, framed a final writing assignment in which we asked the students to imagine a city. This led to incredible musings on an urban and social landscape that would treat us with respect and celebrate our differences.

The focus of the class is to grow confidence in dialoguing about artworks and thinking critically about them. It was truly inspiring to witness the growth our students had and the exciting discussions they produced! Being in the position of a TA in the Outreach program has shown me how much my own critical thinking around art practices has grown at Cooper and how the community we have at the school offers an intense and invigorating space for sharing ideas.