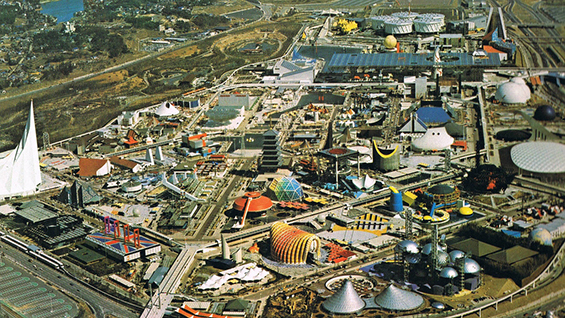 The Stanley Prowler Travel Photos Collection
This collection consists of over 6,000 transparencies by the late architect Stanley Prowler. For over five decades beginning in the 1940s, Prowler traveled extensively in the U.S. and abroad, documenting architecture throughout South America, Europe, and Asia. Using medium format and 35mm cameras with an architect’s eye, Prowler captured the essence of the locations he visited. After each trip he held gatherings at his apartment where he presented his photographs accompanied by insightful observations and details about the people and places he encountered. Following his death, Prowler’s collection of travel photographs was donated to The International Center, where he served as a board member, and in 2006 the Center donated the collection to the Architecture Archive. Stanley Prowler: Expo ’70 is the second in a series of exhibitions—originally presented in the Third Floor Hallway Gallery in 2007—showcasing Prowler’s photography (click here to view the exhibition gallery).

Expo ’70: Progress and Harmony for Mankind
Held in Osaka, Japan from March 15 to September 13, 1970, The Japan World Exposition—also known as Expo ’70—was the first world’s fair in Asia. Attended by over 64 million people, it remains one of the most successful and well-attended world’s fairs. It provide an important opportunity for Japan, which was still recovering from World War II, to build national pride while enabling much-needed updates to Osaka’s physical infrastructure. Taking its cue from the 1964 Olympics in Tokyo, where rebuilding for the event was pivotal to renewing a city ravaged by war and earthquakes, Osaka used the Expo to undertake an ambitious urban renewal project which included rebuilding its antiquated sewage and transportation systems.

The Japanese Metabolist architect Kenzo Tange—who played an important design role in the 1964 Olympics—was also central to Expo ‘70. Tange had built one of the most celebrated buildings at the Olympics, the Yoyogi National Gymnasiums, and he was called back to Osaka to design the Expo ’70 masterplan with Uzo Nishiyama. Located in the Senri Hills nine miles north of Osaka’s center, the Expo covered 815 acres and featured over 100 structures and buildings organized into three categories—"trunk facilities,” foreign pavilions, and domestic pavilions. The trunk facilities were planned by Tange and functioned as a central event zone or ‘trunk’ from which circulation paths or ‘branches’ emerged, structuring the Expo’s masterplan. Designated as the Symbol Zone, these central facilities included a large Festival Plaza, several pavilions addressing the Expo’s theme, and a massive steel space frame roof out of which artist Taro Okamoto’s seventy-meter high Tower of the Sun sculpture emerged. The national pavilions, built by the 76 countries represented in the fair, were rivaled in spectacle and stature by Japan’s domestic government and corporate pavilions, including the famed Pepsi Pavilion designed by Experiments in Art and Technology (E.A.T.).

Prowler’s photographs mainly document the exteriors and interiors of the fair’s pavilions, however other attractions such as outdoor ponds and sculptures make an appearance. Of note is his extensive documentation of the United States Pavilion. The U.S. Pavilion was conceived by a single design team composed of three firms that, combined, formed Davis, Brody, Chermayeff, Geismar, deHarak Associates. Anthony Candido, an artist, architect, and former professor of architecture at The Cooper Union worked at the time for Davis Brody Associates and made major contributions to the pavilion’s design and construction. Structural engineers David Geiger and Horst Berger developed the pavilion’s roof, creating the largest, and lightest, clear span, air-supported roof in the world. A woven fiberglass expanse the size of two football fields, the roof was held in place by cables and supported only by air pressure.

Though the roof of the American Pavilion was an unprecedented and celebrated accomplishment at the time, Prowler’s photographed only the pavilion’s interior, focusing on the flashy Images of America exhibition which showcased common cultural interests in America and Japan and heavily emphasized the recent Apollo 11 moon landing. In contrast to official documentation by designers and scholars, Prowler’s images capture the ’67 and ’70 Expos from the perspective of an interested and educated observer, providing a sense of how visitors encountered the these buildings for the first time, moved within them, and visually interacted with them through the camera lens.

The Eye Behind the Lens
Stanley Prowler (1919–2004) was a New York City-based architect and photographer. His studies at New York University were interrupted by his service in Army during World War II, after which he received his degree from the Yale School of Architecture. He subsequently joined his father’s architectural firm. When Gilbert Prowler passed away in 1952, Stanley took over the firm, located in Brooklyn’s Williamsburg Savings Bank building, and eventually relocated his home and office to Manhattan.