Great Soul: Mahatma Gandhi and His Struggle with India

Gandhi’s struggles on two continents, his fierce but, ultimately unfulfilled hopes, and his ever-evolving legacy detailed in Great Soul: Mahatma Gandhi and His Struggle with India spark the conversation between author Joseph Lelyveld and Jamshed Bharucha, President of The Cooper Union, at The Cooper Union-The Great Hall on Monday, April 16 at 6:30 PM.

Former Executive Editor of The New York Times, Joseph Lelyveld won the Pultizer Prize for his book on apartheid, Move Your Shadow: South Africa, Black and White. He will be joined in a discussion by Jamshed Bharucha, President of The Cooper Union, who was born and raised in India and moved to the United States to pursue several degrees in higher education. In addition, President Bharucha is a cognitive neuroscientist who has been published on the cognitive and neural underpinnings of music. Prior to Cooper Union, he served as former vice provost of Tufts University. 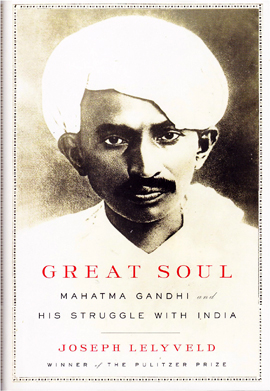