Last spring, stranded in her apartment in Bushwick, Brooklyn, Dayi Novas A'20 wondered how it was that the world had come to a screeching halt. A senior art student, her graduation ceremony had been cancelled and she was unhappily employed by a design agency. How best to get through a quarantine of indeterminate length both productively and peacefully?

The times called for decisive action: she quit her job and did some soul-searching around a simple but radical question: what kind of art-making gave her most happiness? “I started realizing that I could make anything, something pretty for its own sake. I started making things that make me really happy.”

So was born Ouch!, which, as its subtitle announces, is “a happy magazine for everyone.” The point, said Dayi in a recent phone interview, was to soften hard times (ouch!) with an appreciation of beauty, a relaxation of rules to indulge in what drew her to art in the first place.

"For years, I’ve wanted to make a big children’s book for adults who might’ve experienced abuse or neglect as children. During the pandemic, I decided to start this project and garner some income selling copies. I soon discovered the limits of this project and realized instead, I could turn the idea into an ongoing magazine! This way I could still write, design, and create art, but also feature other artists’ work and have a new object every month or two to show for it." The magazine's tenor is child-like with fantastical illustrations, games, and puzzles. She is open to all kinds of drawn and written work "as long as it’s uplifting so I can feel positive too. The idea is to put people in this specific space. And if a submission is about suffering, it better be ‘ouch’ not…,” she trails off not even wanting to name an emotion more anguish–inducing than a childhood scrape.

She takes submissions from a wide-range of artists and writers, some she met at Cooper. Each issue is loosely organized around a theme: for Issue No.1: LOVE includes a feature about a small, rare "friendship book" — a compilation of poems and illustrations contributed by friends and family over the years—housed in the New York Public Library, two meditations on grandmothers; games like I Spy and OuchLibs, a feature on a Chinese restaurant in south San Francisco; and poetry. Most notable is the magazine's stunning illustrations, both drawn and photographed.Though made by various artists, all the illustrations share a love of saturated, multicolored palettes that evoke a world of toys, miniatures, abundance, and play. Later issues are entitled KNICKKNACKS, FOOD, COSTUME, and GALAXY.

Dayi, who was born in Jiaxing, in southeast China, came to Cooper after middle and high school in Jacksonville, Florida. While still a student, she worked for a firm engaged by Congresswoman Alexandria Ocasio-Cortez to design posters for the Green New Deal, an initiative to combat the climate crisis. In that role, she worked as artist and typographer for a set of posters meant to draw connections to the art of the WPA under FDR's New Deal. 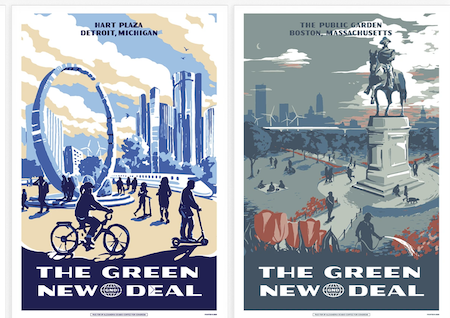 Since she is currently the only staff of this ambitious small press, not only does she illustrate the covers and design each spread, she also creates content, curates, and handles research, social media, and marketing. Up until recently, she had also been printing, cutting, binding, and distributing each copy all on her own. But this past fall, Dayi believed she would have to end the magazine when her production and overhead costs started increasing to unmanageable levels. "It cost me $25 to print only 4 copies!" Just as she was working on Issue No.5: GALAXY, the issue she assumed to be her last, a print firm long-associated with The Cooper Union gave her an excellent deal for printing and binding Ouch!, a bit of generosity that lets Novas continue the project.

To learn more or subscribe, you can find Ouch! here.