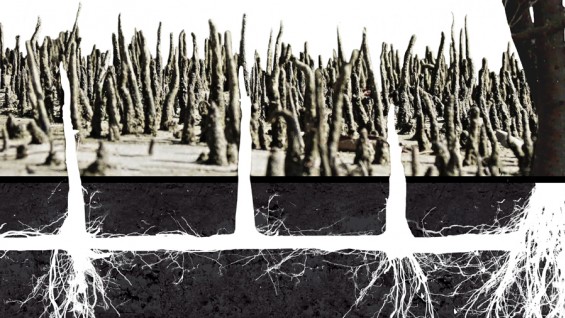 This exhibition presents the work of the Master of Architecture II graduate studio, focusing on the Thesis projects but presenting a selection of work from the entire academic year. The work represents an approach, which without prescribed boundaries, challenges the established frontiers of architecture through critical and visionary responses to contemporary issues, while simultaneously thinking and re-thinking architectural discourse itself. Time has been the subject of the studio, focusing on the Urban Dimension and Nature.

The Urban environment, the most important cultural and social production, is seen as the determining factor of architecture. Time is essential in the understanding of the urban condition and the urban field. The work presents different interpretations of this concept as they unfold and reveal urban conditions that while part of everyday life are not "seen." Time has been considered from a filmic to a social, historical and scientific point of view. Two cities have been the locus of this exploration: Mumbai and Los Angeles, as they present and represent the physical, cultural, technological and ecological conditions of the contemporary city.

The question of Nature is explored from the philosophical and scientific discourses that have explained it throughout history to the present. Time, in this case, is not historical but of a cosmic scale. A different dimension of time and scale is the object of this exploration, focusing on places that took billions or millions of years to develop and thousands for transformations to be perceptible, until the most recent past, where processes of transformation have accelerated. A critical examination was made at various scales, ranging from the national to the regional and the local, where the objective means of observation are read by means of drawings through the eyes of the architect.

Based on the subjects developed in the previous semesters, individual thesis proposals were made on subjects of each student's choice, developed with extraordinary drawings and models.