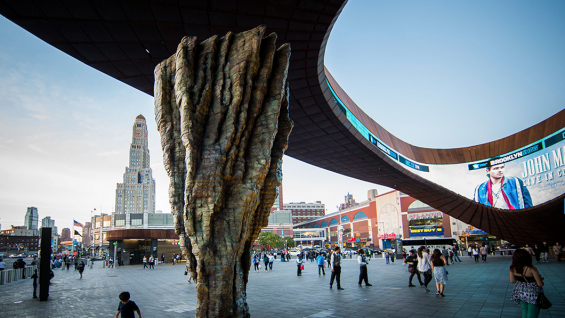 Co-sponsored by the Architectural League of New York.

The Wendy Evans Joseph Lecture on Art and Architecture presents the work of an artist whose work is inspired by the built environment. On May 12, artist Ursula von Rydingsvard will present her recent work in this public lecture.

Ursula von Rydingsvard is a sculptor based in Brooklyn. As noted by Galerie Lelong, the meaning behind her work is rooted in personal experience. “She creates large-scale sculpture from cedar beams which she cuts, assembles, and laminates, finally rubbing powdered graphite into the work’s textured, faceted surfaces. Born in Germany in 1942, von Rydingsvard and her family were among the dispossessed that, after the war, were forced to move from one refugee camp for displaced Poles to another, eventually settling in the United States in 1950. The artist’s respect for organic materials and the dignity of labor, sense of loss and pain, and the persistent memories that inform her work may be traced back to these formative experiences.”

Free for current students/faculty/staff of The Cooper Union and League members.