Lecture by Tao DuFour: The Specter of Sullivan 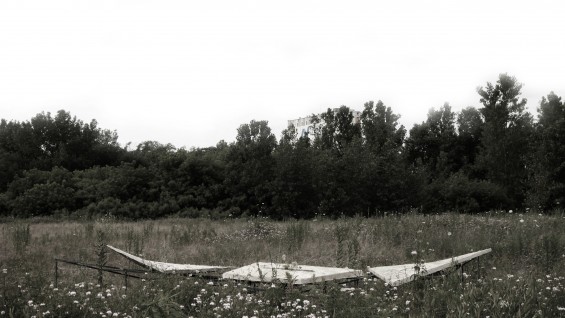 Concrete panels and steel frame installed in the Grand Trunk site of the Inner Harbor, Milwaukee. Photo by Kelly Yuen.

Tao DuFour’s lecture will present themes explored through his work as SARUP/UWM Architecture Fellow 2013-14. The design work produced through this fellowship was the result of both theoretical inquiry and technical investigations in the labor of fabrication. The theoretical basis of the work developed through a meditation on the motif of wilderness, as this emerged in the intellectual context of North America in the 19th c. The work appropriated this context as an inheritance. Fortunately, and in the spirit of anything that is concretely handed down, physical artefacts were preserved, namely, molds for the casting of façade panels based on the design of ornament by Louis Sullivan. By means of these artefacts as a type of ‘writing’ – a mode of communicating ideas in the absence of the one who thinks them – the theoretical inquiry into the 19th c. theme of wilderness was mixed with concrete studies of geometry, ornament, and casting techniques. In this way, the work aimed to bring to visibility the echoes of an earlier understanding of the transcendental meaning of Nature, as ambiguous and haunting as this may have been, and continues to be. In attempting to articulate an intellectual heritage in the form of a concrete artefact, the work must be supplemented by more explicit verbal/textual interpretation. The lecture will serve to contextualize the presentation of the design work, in relation not only to the intellectual horizon of Sullivan’s era, but to the spectral presence of this past in the contemporary situation.

Tao DuFour is an architect and scholar, currently a Visiting Critic at the Department of Architecture, Cornell University. He was the Architecture Fellow 2013-14 at SARUP/UWM, and held the Rome Prize in Architecture 2012-13 at The British School at Rome. He holds a Ph.D. in architecture and an M.Phil. in the history and philosophy of architecture from Cambridge University (UK), and a B.Arch. from The Cooper Union. DuFour’s work explores the overlaps between architecture, philosophy and anthropology. His theoretical projects and writing address philosophical and anthropological interpretations of the natural life-world that inform conceptions of architecture, geography and ornament. He relates this to his drawn and fabricated work, which investigate possibilities for mediating traditional and computational techniques, specifically as regards the connectivity between synthetic and analytic approaches to geometry. DuFour has exhibited work in New York, Rome, Cambridge, Milwaukee, and at the Royal Academy of Arts, London.