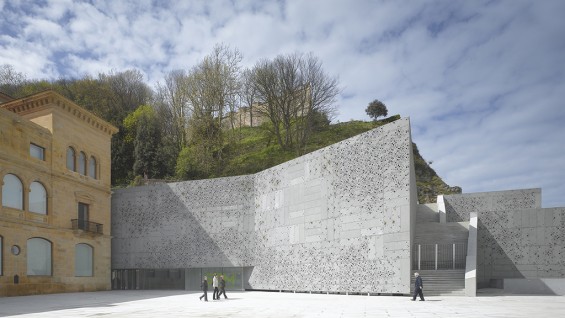 The richly textured work of Nieto and Sobejano is recognized for its sympathetic response to topography and historical attributes of place, qualities lauded in the citation for the Alvar Aalto Medal awarded to the firm earlier this year: “The roots of their architecture lie in Spain, and its multi-layered history and culture. Their works speak a silent language, proving that the precondition of meaningful architecture is an in-depth understanding of local culture and the context of the design brief.”

In addition to the Alvar Aalto Medal, Nieto and Sobejano are past winners of the Aga Khan Award for Architecture and the Piranesi Prix de Rome. The firm was also awarded the National Prize for Restoration from the Spanish Ministry of Culture and the Nike Prize issued by the Bund Deutscher Architekten (BDA), the European Museum of the Year Award, and the Hannes Meyer Prize. Sobejano is a professor at the Universität der Künste Berlin, where he holds the chair of Principles of Design. Both Nieto and Sobejano have been visiting critics and lecturers at universities in Spain and abroad, are past co-directors of the journal ARQUITECTURA, and have had their work featured in numerous publications, including the recently published monographs Nieto Sobejano: Memory and Invention and Fuensanta Nieto Enrique Sobejano Architetture.

Jorge Otero-Pailos is Associate Professor of Historic Preservation at Columbia University’s Graduate School of Architecture and the founder and editor of the journal Future Anterior. Otero-Pailos also serves on the League’s Board of Directors.