Rose earned her Ph.D. from The School of Oriental and African Studies (SOAS), University of London in 2016. Her doctoral thesis is on migration and the assertion of African Diasporic identities in the work of artists of African descent based in the United States and Britain in the photographic work of Carrie Mae Weems, Joy Gregory, Albert Chong, Renee Cox, Rotimi Fani-Kayode, and Yinka Shonibare.

Rose Ojo-Ajayi has also written text-based works as a collaborative project with visual artists along with writing for publications such as the Studio Museum in Harlem’s STUDIO magazine, curating and co-curating exhibitions that feature the work of artists of African descent in New York City and London, UK. Currently she is investigating the representation of Black American and Black British identities in the contemporary work of first and second-generation African immigrant artists. 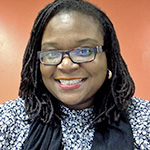