Christina M. Squitieri is a PhD Candidate in English Literature at New York University focusing on early modern drama. Her dissertation, “Theatrical Transformation and the Limitation of Identity on the Early Modern English Stage,” argues that early modern plays present three theatrical elements—costume, speech, and gesture—as able to impose an ongoing, recognizable identity onto a character that is difficult to remove at the end of the play, limiting that character’s identity in the process. Her other research interests include western theater more broadly, classical literature (and its influence on the early modern world), early modern science, law and literature, and female power and agency in the early modern period, particularly within the history play. Before teaching at The Cooper Union, she has taught in the English and Core Curriculum departments at the College of Arts and Science at NYU and the in the First Year program at the Gallatin School of Individualized Study. 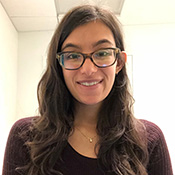