Chitra Ganesh is a Brooklyn-based visual artist whose work encompasses drawing, painting, comics, wall installations, video art, and more. Through studies in literature, semiotics, social theory, science fiction, and historical and mythic texts, Ganesh attempts to reconcile representations of femininity, sexuality, and power absent from the artistic and literary canons. She often draws on Hindu and Buddhist iconography and South Asian forms such as Kalighat and Madhubani, and is currently negotiating her relationship to these images with the rise of right wing fundamentalism in India. Ganesh graduated magna cum laude from Brown University, and received her MFA from Columbia University. Her work has been exhibited widely across the U.S., Europe, and South Asia. Her works are held in prominent public collections such as the Philadelphia Museum of Art, San Jose Museum of Art, Baltimore Museum, the Whitney Museum, and the Museum of Modern Art. 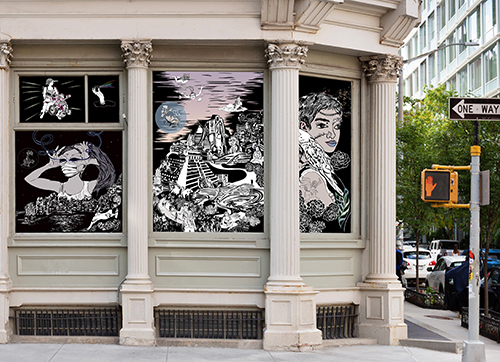 Chitra Ganesh, A city will share her secrets if you know how to ask, detail, 2020. Photo credit: Kristine Eudey