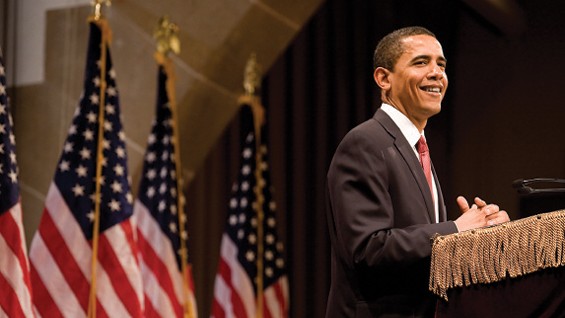 Barack Obama, U.S. Senator from Illinois and, at the time, one of two candidates for the Democratic nomination in the 2008 U.S. presidential election, made a major economic policy announcement in the fourth program of The Cooper Union Dialogue Series on March 27. Mayor Michael Bloomberg, introduced by Dr. Ronald W. Drucker (CE’62), chairman of our Board of Trustees, introduced the senator. Obama spoke about confronting the current housing crisis and strengthening the regulatory system governing American financial markets. He described six principles to guide the legal reforms of the regulatory system. He said, “…we have to make government responsive once again to all of the American people…. I know that making these changes won’t be easy. I will not pretend that this will come without costs, although I have presented ways we can achieve these changes in a fiscally responsible way. I believe in PAYGO. If I start a new program I will pay for it…. But if we unite this country around a common purpose, if we act on the responsibilities that we have to each other and to our country, then we can launch a new era of opportunity and prosperity.” The event was reported in top tier outlets across the nation as well as local press, including The New York Times, The Wall Street Journal, CNN, NBC Nightly News with Brian Williams, The New York Sun, Chicago Tribune, CBS Marketwatch, NY1, New York Post, New York Daily News, WABC-Ch.7, WNBCCh. 4 and WCBS-Ch.2.