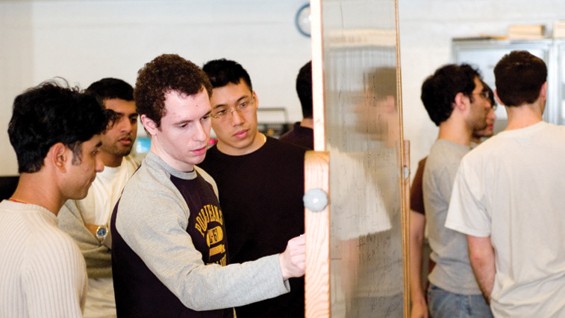 “We have this vision,” says Eleanor Baum, “about project-based learning. The students at Cooper Union are just too smart to be taught solely from a book. With project-based learning, they have to create ideas they don’t know, they have to learn things they don’t know and what comes out of this is innovation, discovery and inventiveness.” At Cooper met with the Albert Nerken School of Engineering’s Dean Baum and Associate Dean Simon Ben-Avi to discuss some of the interdisciplinary research centers that will operate under the new C.V. Starr Research Foundation.

Baum, an enthusiastic spokeswoman for her school, holds a B.E.E., M.E.E., Ph.D. and two honorary degrees. Ben-Avi was originally trained as an electrical engineering professor, but has a doctorate in computer science and artificial intelligence, and conducts research in biomedical engineering. Both see project-based learning as very important because it generates the innovative and creative energy of the whole school. As Professor Stan Wei, who directs the Center for Materials Design and Manufacturing Technology, says, “one objective is to make sure that the students get a well-rounded education even though they are trained as mechanical engineers, so they’re prepared to go out and solve interdisciplinary problems. The second thing is that we want to be sure that they can communicate well to their peers and to people in non-engineering professions. Finally, we want to be sure they know that learning is never ending.”

The Nerken School has an advantage in its diverse faculty, each of whom has diverse research interests to match. Ben-Avi, for instance, is also a classical musician. Professor David Wootton, who heads the Maurice Kanbar Center for Biomedical Engineering, was brought up in a family that fostered interests not just in the life sciences, but in the arts as well. Professor Jameel Ahmad is a consultant for the New York City Police Department, while at Cooper Union he runs the Center for Urban Infrastructure and Systems. Professor Ruben Savizky (ChE’98), a chemist, is trying to figure out the exact chemical content of ancient Roman paint, to see if the technique can be replicated. Another concern he has been working on since graduate school relates to the issues surrounding a cure for AIDS. The engineering school is full of men and women who are confident that they can find solutions to help change the world. The issues that come up repeatedly are sustainability, security and improving the lives of others, whether through improved medical devices or more efficient ways of using energy. This isn’t just idealism; they’ve got the skills, knowledge and motivation to work on some of the greatest challenges facing our society.

Though the faculty comes from different sub-disciplines, one thing that all have in common is a focus on work that has an immediate and real impact on the world outside academia. This concern with relevance beyond the elegant solutions of the theoretical is a principal basis for the School of Engineering’s support of innovation and is largely unusual for an undergraduate program. Because professors collaborate and tend to work on several ideas and projects simultaneously, there are always a great number of interesting endeavors being carried out at any given time.

The research centers in the School of Engineering are pivotal in terms of the cutting edge studies they will facilitate, and the expectation is for increased collaboration. For instance, the Center for Materials Design and Manufacturing Technology will deal with product design, robotics and nanotechnology. The center will allow engineers to work in the fairly new field of nanotechnology to achieve improved materials in the development of, for example, fuel cell technology. More partnerships are being formed among the subdisciplines, like that of Wei, Professor George Sidebotham and Professor Robert Dell, director of the Cooper Union Laboratory for Energy Reclamation and Innovation. They are currently conducting research on a Con Edison sponsored project to save and recycle energy lost in the process of providing steam energy to New York’s inhabitants. They have developed a device that would lower costs and increase energy efficiency both for the energy company as well as the consumer.

Professors not only work together on projects within engineering, but with faculty and students from Cooper Union’s other schools. They collaborate with people at other universities as well, and also with a wide range of people who work outside of academia altogether. Professor Toby Cumberbatch, an electrical engineer, for example, strongly feels that in order to best accomplish his goals, collaboration is essential. With this in mind, he created the Center for Sustainable Engineering, Architecture and Art—Materials, Manufacturing and Minimalism (SEA2M3), because an interdisciplinary approach is necessary, as he writes, “to develop an awareness of solutions to engineering problems that preserve the integrity of the commons, the natural resources that we all share and need, such as the atmosphere, the oceans and the vegetation.” He’s currently running his fourth two-month program in Ghana with a select group of students from each of Cooper Union’s schools—art, architecture and engineering—who try their hand at creating tools that make sense within an environment that is so completely different from our Western one, not least of all in terms of impoverishment and lack of materials and limited resources. The projects his students are working on include rechargeable lanterns and a defluoridation filter. His students have risen to these challenges, and will test out their inventions at the field school this May. After having the Ghanaians critique their work, they’ll return to Cooper Union with a much clearer idea of how to enhance the practicality of their work. The back and forth of interacting with other people will have added immensely to the learning process.

It is exactly that interdisciplinary nature of learning and teaching at Cooper Union that makes a huge contribution to the environment of innovation and inspiration. Because of their pioneering approach and their work outside academia, many of the faculty are patent holders. For example, Ahmad holds several patents, including one for an imploding wall, which he shares with Cooper Union. Originally from Pakistan, Ahmad has been at Cooper Union for almost 39 years. He feels students should look at what major societal problems need to be solved, and then develop the skills necessary to do so. He believes that where there are problems for engineers to solve, there will be funding, so addressing the needs of society will allow his center to become self-sufficient.

The belief that engineers should work to meet society’s needs is a common thread. As Dell says, “There are many systems. Walking is a system, painting a picture is a system, engineering is a system. If you have four or five systems that have to be integrated, you have to make sure that when you solve a problem in one system, you’re not creating greater problems in the other interconnected systems. When you understand the totality with clarity, then you realize that though there’s no such thing as a simple problem, there can be an elegant and simple solution.” It was this approach that led him to wonder about district heating systems in urban areas that generate steam in central locations. “In New York City, more than 2,500 buildings use steam generated by Con Ed, however not all of the steam is used,” he says. “There is no recirculation system. The waste steam heat, in the form of steam condensate, is currently mixed with and cooled by the municipal water supply. This fluid is dumped into the sewer system creating thermal pollution, which wastes both potable water and energy.” Dell realized that the excess heat could be used to warm the soil of small urban gardens, which would have the additional advantage of conserving water. “This will prolong the growing season and significantly increase crop yields, which can create year-round gardens,” he says. “This technology can be integrated to improve the benefits of green roofs.”

In 2006, Dell, who holds a number of pending and provisional patents, received a major grant from the Lindbergh Foundation to carry out this research. The University of Iceland’s Agricultural Research Station has appointed Dell visiting research scholar. He is establishing a study abroad link that will enable Cooper Union students to work with him using geothermal hot water in the Reykjavik area to test his system in a northern climate. Project-based learning and the creativity it fosters, as well as the high caliber of students, have made Cooper Union an inviting place to work—so much so that it has attracted many of its alumni to the faculty. Professor Fred Fontaine (EE’86/ME’87), director of the Center for Signal Processing, Communications and Computer Engineering (S*ProCom2), has both undergraduate and graduate degrees from Cooper Union. He has been developing new technologies for the effective collection of information, an application which has the potential to change many fields. “We’re being flooded with large amounts of data,” he points out, “and data is not, in itself, information.” Exploring that concept, Fontaine is developing a new approach to MRI technology, which will selectively scan for information rather than gathering a great deal of unnecessary data. “One of the problems with biology,” he says, “is that the systems are large. The human body is large and complex. It’s very hard to deal with in a systematic, scientific way.” The MRI technology that he’s developing would allow doctors to scan the human body selectively to only take the information they need, and leave out the data that’s not essential. These new technologies will sift through tons of data to pick out what’s important. They can be used, for example, to create machines that can detect landmines or chart changes of environmental conditions. He and his students are working on research sponsored by Fresh Direct, a company that ships food directly to customers, to create smart software to customize service for their clientele.

This MRI technology is very interesting for bioengineering. Wootton is working on tissue engineering, and one of his projects is to come up with new ways to deal with sleep apnea, where the tissues of the throat collapse while a person is sleeping, obstructing air passage ways, which can lead to death. Fontaine’s technology would provide one more way for doctors to see what exactly happens, which would allow Wootton to engineer a more effective solution. Wootton’s work with tissue engineering could also have revolutionary significance for things like problematic knees and other joints—with his students, he is actually coming up with ways to make cartilage and to then attach it to bones.