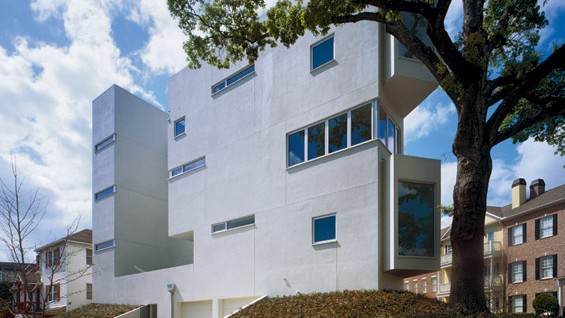 View of the OneTwo Townhouse

“It is a basic tenet of the Surrealist world,” says François de Menil with a gentle laugh, “ that you should feel slightly uncomfortable.”

If you look at de Menil’s accomplishments, you might wonder where that slight discomfort fits in. He runs his own successful architecture practice, is a member of the College of Fellows of the American Institute of Architects and a trustee of the Cooper Union and the Brearley School. Before becoming an architect, de Menil had an award-winning career as a documentary filmmaker, directing and producing films on artists like Jean Tinguely, Niki de St Phalle and Mark Di Suvero. Recently, he chaired the committee to select Cooper Union’s 12th president.

Unexpected juxtapositions—the mixing of elements that the Surrealists thought created a sense of discomfort and “déséquilibre”—have been the spark in much of de Menil’s life. This is balanced by his practice of being deliberate and considered in his thinking: “I have a habit of questioning myself—I want to make sure I’m making the right choices in a project.” 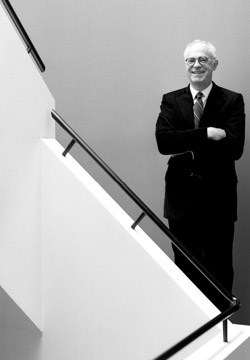 The first of those juxtapositions was his heritage. His parents, Jean and Dominique de Menil, were French immigrants who relocated to Houston during World War II, and were passionate art collectors and champions of the intersection of art and spirituality; they founded the Art Department at the University of St. Thomas, the Institute for the Arts at Rice University and would later build a new museum to house their own collection. The fourth of five children, de Menil was born in 1945, the first in his family to be born in the United States. Even though he felt completely accepted in his Texas community, his background meant that he was slightly different to his friends.“We went to France in the summers, and stayed in Houston the rest of the year,” he says. “I had a French name and a Texan accent, and at our house we spoke a mixture of French and English we called ‘frenglish.’”

Another interesting juxtaposition has been in relation to how he has developed his career. Both as a film-maker and as an architect, de Menil started out by being a self-taught filmmaker. In the mid- 1960s, de Menil left Columbia University, and went to live in Paris for several years. It was in France that he began making documentaries about his artist friends, like Tinguely. Later, he would return to New York City, and teach himself about the process of architecture, through working with Charles Gwathmey, from whom he had commissioned a house for himself in Long Island. After working on this project and one other, de Menil decided to get a degree in architecture, and applied to Cooper Union. “Whatever I thought about architecture,” he says, “was radically altered by going to Cooper.” John Hejduk, Raimund Abraham and Sue Gussow changed my vision and understandings. The power of the great teacher was experienced through each of these individuals in a life-altering manner.

But if those juxtapositions were one undercurrent that shaped him, the other thread that has run through his career has been the omnipresence of art and its narrative flow. Art had been an integral part of his upbringing—“I didn’t realize at the time what a gift it was,” he says. He had chosen filmmaking because of narrative, and his sense of narrative was further developed at Cooper Union. “John Hejduk, who was the Dean of the architecture school, was engaged in the importance of narrative and its potential as a generator of architectural form,” he explains. “It came from Cooper, but was supported by what I was already comfortable with: art.”

In fact, his architectural projects are often inspired by an artwork. One such project was the One Two Townhouse in his hometown of Houston (2006). The challenge was to use a small, triangular piece of land efficiently, creating enough space for two residences to coexist on the parcel.WhendeMenil started investigating the parking requirement, he immediately thought of a piece by Andy Warhol, Dance Diagram, 1962, which is a copy of an instructional guide showing the placement of the feet. This then made him think of Francis Picabia’s Printemps (1937–1943) where two figures are intertwined, arms outstretched, against a background of flowers. Both images have in common that the feet stand together. This gave him the basic idea for the OneTwo Townhouse, where both residences—each a gleaming white tower, inviting in light and making the most of the small space—rise separately from a shared base. “I saw a relationship to the picture,” de Menil says. “The two houses had this way in which they were trying to reach around each other, like dancers’ arms.” 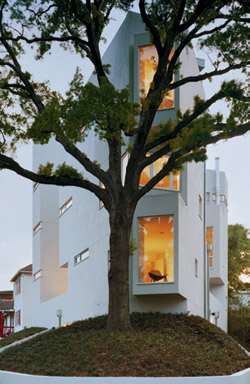 It is perhaps this sense of narrative and his balanced approach that made him a natural choice to chair the search committee to recruit Cooper Union’s new president in 2010. The committee was looking to find someone whose values matched the culture at Cooper Union, but also a person who could lead Cooper in the next decade. After a great deal of work, they found those qualities in Dr. Jamshed Bharucha, who was the provost and senior vice president at Tufts. Though he chaired the committee, de Menil is eager to share the credit: “We had a very good team of trustees, the Administration, the Deans, the tenured and the proportional faculties and a student representative: it was a diverse team, and we got along well. It wasn’t easy, but we, as a committee, reflected the views of many of Cooper’s constituencies.”

De Menil is currently working on the Seneca Art and Cultural Center, for the Seneca Indians in upstate New York. If the Surrealist tenet of being slightly uncomfortable with the world is part of de Menil’s thinking, so perhaps is reconciling the unexpected juxtapositions.

De Menil and his wife Susan have three children, John, Sophie and Conrad.He received his undergraduate degree from the Irwin S. Chanin School of Architecture in 1987, and established his own practice in 1991, and has produced work to much acclaim since then.He is a LEED accredited professional.