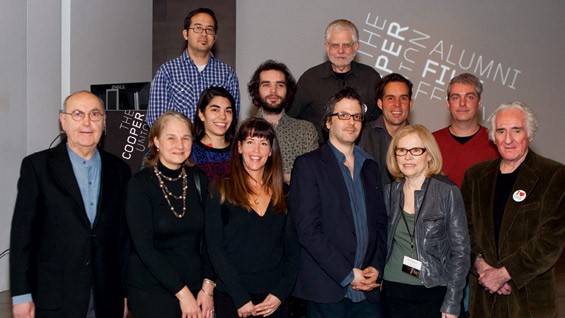 Films written, produced, directed, created or about Cooper Union alumni were screened over four weekends during the inaugural Alumni Film Festival. Features, documentaries, shorts, animation and experimental and fantasy narrative films demonstrated the diversity of the creative work performed by Cooper Union alumni of all disciplines.

The film festival was developed by a committee of alumni and staff in collaboration with the Office of  Alumni Relations. Co-chairs Carmi Bee (AR’67), Lea Cetera (A’05) and Neal Slavin (A’63) worked with Kathryn McGraw Berry (AR’80), Rocco Cetera (CE’99), Janet Gardner (A’65), Director of the Irwin S. Chanin School of Architecture Archive Steven Hillyer (AR’90), Associate Dean of the School of Art Steven Lam, Director of Alumni Relations Susan Moyle Lynch and Manager of Alumni Outreach and Events Madeline C. Kilroe.

“In shaping the festival, the committee was surprised to find out just how many alumni filmmakers are out there,” said Steven Hillyer. “This first festival represents a modest cross section of an extensive amount of material produced by Cooper Union graduates—we barely scratched the surface.”

The festival kicked off on January 28, 2011 in the Frederick P. Rose Auditorium in 41 Cooper Square with the short After Ghostcatching, with visuals and sound by Shelley Eshkar (A’93) and Focus, directed by Neal Slavin. Screenings continued through February 26 and attracted 566 attendees, including alumni, staff, faculty, students and members of the community.

“[The films in the festival] are of special interest because they are coming from visual artists (with the exception of a few architect filmmakers) who began as painters, sculptors, photographers,” Cetera said.

“Because of this, in many cases you will get really groundbreaking and interesting work that you don’t find in other film programs. Cooper students tend to experiment, push boundaries and think differently.

Documentaries included John Hejduk: Builder of Worlds, directed and produced by Michael Blackwood, featuring former Architecture Dean Hejduk (AR’50) conversing with poet David Shapiro about the mystery and spirit of architecture. Significant contributions by Cooper alumni to the evolution of film were also showcased, including work by the late animation pioneer Max Fleischer (A’1900) and experimental media artist Stan VanDerBeek (A’56, Dec.).

“It’s my hope that this is the first of many alumni film festivals to come,” Hillyer said. “The media produced by Cooper Union graduates is unique, diverse and covers a number of genres. It should be celebrated by the school, and the festival provides a great way to connect alumni with students, as well as reconnect alumni with their former professors.”