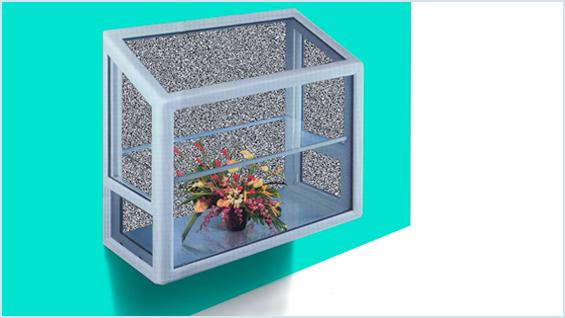 "Window Gardens" is a program of experimental videos, many made by recent School of Art alumni, that explore facets of contemporary personal space. Made on shoestring budgets, these works reflect their post-industrial context during economic austerity. In a Bohemia without its own SoHo, young artists increasingly rely on digital means to investigate issues of space. The ten featured artists belong to a generation caught up in the process of gentrification, at once its vanguard and victim.  Their engagement with time-based media supplies answers to a common dilemma: where to situate creative practice outside of the art market and academic institutions? Ranging from narration to abstraction, works in this screening conjure up a precarious sense of privacy.

Videos, in order of appearance:

“I STREET”
by Feliz Solomon
6 min
2011
A brief and inadequate portrait of my mother.

“House Touch”
by Taylor Shields
21 sec
2008
House Touch shows the growth of a house and a tree. Although originally planned as a sculpture, it came to life on film. It comes from a series of animations titled Souls that were created at NSCAD in Halifax, NS.

“Everything All At Once”
by Lily Benson in collaboration with Jim Strong
4 min
2011
This video contains everything.

"Domestic Plant Limbo"
by Dmitri Hertz
3 min
2009
Nature sounds in Tonina on the Usumacinta River, at the border between Chiapas, Mexico (near side) and Guatemala (far side). A waterproof camera and a house plant in Brooklyn, New York. Bound together in a peaceful trauma.

“Spread”
by Cassandra Guan and Harold Batista
15 min
2011
Quarter of an hour spent without anyone becomes filled with thoughts of everyone. On an ambling walk to the post office, she plans a birthday party and remembers to forget someone.

“HOME ALONE 2”
By James N. Kienitz Wilkins
14 min
2011
Amidst cell phone tones and extended loans, a woman falters through space and time, lost in New York. An unexpected guest arrives, a conversation ensues, and it is suggested that adulthood may be an extraordinary and duplicitous sequel.

“Real Girl”
by Sunita Prasad
3 min 22 sec
2009
This video more fully introduces my two drag personas, Sunny & Benny. Sunny is a lavender-coifed hyper-feminine girl-next-door. Benny is a city guy with style, a sort of shy charm, and hormones bubbling to the surface. In this video, Sunny works the phone answering to a mystery caller’s desires absently as she busies herself with a transformation he’ll never see. The video engages the idea of “realness” in a coded exchange of a gendered body (images and fantasies of this body) for money. Real, live, amateur bodies have a competitive edge—but the promise that the real thing will imitate the fantasy is essential. What Sunny and Benny know that the caller doesn’t is that their bodies are made-to-order and the “real” thing can never be accessed.

“Teen Justine”
by Thomas Love
2011
3 min
A new and improved Justine, relocating the misfortunes of virtue to the surburbs. The falsity of self expression is the source of a young boy’s resilience.

“Corby's Song for Kwon's iPhone”
by Kirby Mages
14 minutes
2010
This video originated from a recorded Skype conversation in which my friend HaeAhn Kwon read the Buddhist Heart Sutra aloud to me the night before I was leaving for a trip to Amsterdam. The Heart Sutra makes note of form and emptiness--the video became an expansion of this concept in relation to personal connections built, lost, and/or transformed due primarily to distances and how technology affects these connections. The video takes on various forms that substitute for pre-existing forms (i.e. television, time-telling devices, specified aspect ratios, America, etc.) As each form reaches the verge of establishment, it collapses into something else. The video is also meant as a tribute to the all too oft unmentionable power of friendship and love to overcome these pre-existing forms in order to create new ones. Its strength during times of isolation and solitude--be it alone in a studio, alone in a new place, alone in one's own mind.