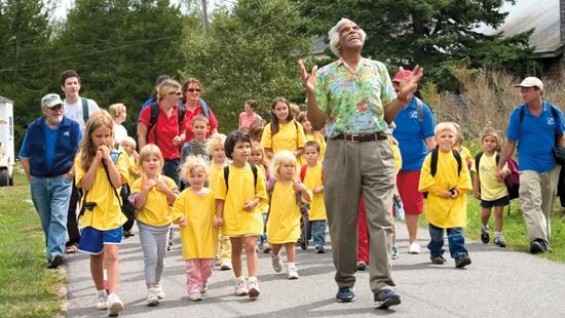 The Islesford School of Islesford, Maine, was renamed the Ashley Bryan School—a decision to honor the celebrated artist and writer, Cooper Union alumnus Ashley Bryan (A'46). Bryan has been a long-time resident of Islesford, and is a revered member of the community.

Bryan's writing and illustration have won the children's book author many prestigious awards over the years: not least of which are the 2008 New York City Library Lion award (shared with Salman Rushdie, Nora Ephron and Edward Albee), the 2009 Laura Ingalls Wilder Award, and the 2012 Coretta Scott King-Virginia Hamilton Award for Lifetime Achievement in children’s literature and education.

The Working Waterfront writes on Bryan's recent honor in Islesford and his role in the community.

Islands with dwindling populations feel increasing tension when hard decisions have to be made at town meetings. Debates can be heated and long. This year, one warrant allowed our community to take a break from issues like expensive road repairs and trash removal, and to take a close look at who we are, what we stand for, and the legacy we want to leave our children. The result put a smile on every resident’s face—a testament both to the democratic purity of our traditional New England town meeting and also to Islesford resident, writer, artist, children’s book author and illustrator, Ashley Bryan. Indeed, one of the smallest communities in the whitest state in the country made history last month by being the first community in Maine to name its school for an African American.