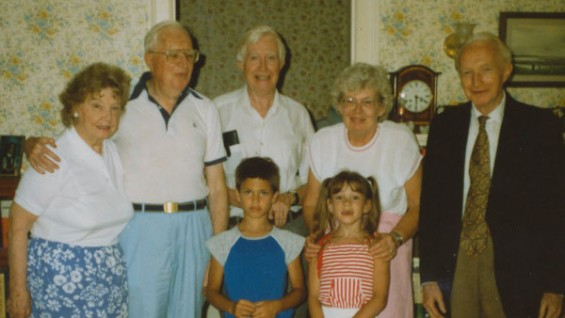 Jane Deed, who died in 2010 at the age of 104, has left The Cooper Union nearly two million dollars from her estate, bringing her total gifts to the institution above four million dollars.  Remarkably, she did not attend The Cooper Union. Instead it played a key role in her personal life that, combined with her desire to ensure a world-class education for deserving students regardless of means, has made her one of the institution's most generous benefactors.  A peek at her correspondence with the development office during the last decade of her life reveals her philanthropic motives along with some of the personality of a woman who retired from a career as an Executive Secretary in the mid-1960s and went on to manage a portfolio of investments past her 100th birthday.

In 2005, with her first major gift, Mrs. Deed established a pair of endowed scholarships, the Jane E. and Donald W. Deed Engineering School Scholarship Fund and the Jane E. and Donald W. Deed Art School Scholarship Fund, because, "Scholarships are and always will be my primary concern," she wrote at the time.  She instructed that only the interest be used to provide the scholarships, thus ensuring that "those funds will exist forever." Her recent estate gift will further endow the funds for these scholarships. "The two funds will provide full scholarships for several students per year in each school," Donna Lippman, Director of Planned Giving, said.

But Jane Deed especially chose The Cooper Union for her philanthropy not only because of its history of benefiting needy students, but for personal reasons.  During the late 1930s she briefly worked as secretary to the Director, a position later known as President. But this was far from the reason for her later generosity. "In order to create a more friendly atmosphere, a professor in the Humanities Dept. invited all of the single people to a party in his apartment.  This accomplished his objective and also resulted in several marriages, including mine in 1943," she wrote in a November 10, 2006 letter.  At that party she met Donald Deed (ChE'37), who was teaching Chemical Engineering at Cooper Union at the time.

According to a "resume" she supplied the development office in 2006 Jane Deed was born in New York City on February 3, 1906.  She started her career at the New York Stock Exchange from 1929 to 1937 until switching to The Cooper Union in 1938 where she worked for three years.  Afterwards she worked at the American Home Products Corp. (later Wyeth Corp.) for twenty years, eventually becoming Secretary to the Chairman of the Board until she and Donald retired in the mid-sixties. They moved to Millburn, New Jersey in 1968. In 1988 Donald died. Afterwards, "I became interested in investing. This still keeps me busy" she wrote shortly after her 100th birthday.  She lived in Millburn until her death in 2010.

Her evident success at managing her portfolio met with a philanthropic desire to mitigate disparity. "… I have noticed the growing economic gap between the rich and the poor; and especially between the middle class and the rich," she writes on December 26, 2006. "Aunt Jane was scandalized by the growth in college costs, and determined to do her best to see that deserving students got a chance to attend college," Ken Deed, nephew of Jane Deed and executor of her estate, wrote in a recent email. Her generous donations have made that possible.  In a thank-you letter to Ken Deed, Derek Wittner, Vice President for Alumni Affairs and Development wrote,  "Your aunt's legacy gift establishing [the] two endowment funds … will benefit the talented students of the Albert Nerken School of Engineering and the School of Art for generations to come."