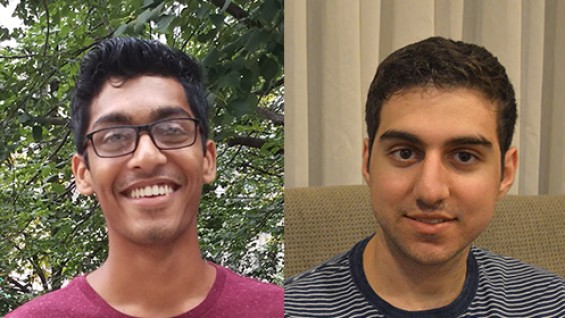 This summer, Nikhil Iyengar and Robert Faddoul, both rising sophomores at the time, participated in the New York City Regional Innovation Node (NYCRIN) I-Corps, a program started by the National Science Foundation (NSF) in 2012 that teaches researchers how to articulate and test a set of hypotheses about what it would take to convert their technologies into marketable products.  Nikhil and Robert took part in the program’s 5-week “bootcamp” that teaches the current best practices of start-up companies. They were the youngest members of the class and were some of the youngest participants in the program's history.

“The goal is to learn the skills needed to assess whether or not your idea could be commercially viable. Robert and Nikhil learned how to test the validity of an idea with real world market feedback,” said Christina Pellicane, manager of NYCRIN—one of seven regional offices of the NSF’s I-Corps program—and an adjunct instructor at The Cooper Union.

The two mechanical engineering students met in Prof. Eric Lima’s Principles of Design (EID 103) class this past spring where they collaborated with three other students, Pranav Joneja, Alecsey Kovalenko and Anish Malladi. Students learned to employ Lean LaunchPad, a method for devising and testing a business idea that was developed by Steve Blank, a well known Silicon Valley entrepreneur and Stanford professor. Prof. Lima sees great value in using Lean LaunchPad in the classroom and explains that the course encourages students to have a long-term vision about bringing their products to market. “It’s getting to a better idea by systematically exploring the real-world context of that idea. Who would their first customers be? How might they pay for it? How would they get the product or service? What would it cost to develop and sell and stock and advertise the product. The idea is that students can modify their idea each week as they test their entrepreneurial hypotheses.”

Using a “flipped” classroom model, Prof. Lima required students to watch lectures and read from their text before class meetings. Class time was largely spent on group presentations given by students who had to explain their ever-evolving strategies for testing their business ideas and incorporating concepts from the lectures. The design of EID 103 was one of the reasons that Forbes magazine named Cooper Union the #1 Most Entrepreneurial College of 2015.

In class, students received immediate guidance from the teaching team comprised of the instructors, Lima and Pellicane, a teaching assistant Tom Chan ME’17, and eight mentors, experts from the worlds of business and technology. One mentor was assigned to each group. Nikhil and Robert’s team worked with Joel Ndreu, an electrical engineer who was Chief Operating Officer of STV Inc. Initially the group expressed interest in creating an energy-saving device for people to control power usage of their appliances remotely, estimating that the device could save users approximately 20% on their electricity bills. To understand potential interest in the product, they conducted interviews with industry experts and company executives.

“We found people don’t care about saving 20%. For many of them the electric bill is part of their rent. So we said ‘Okay, let’s pivot,’” said Nikhil, using entrepreneur-speak for changing direction.  At that point, Ndreu suggested they research Con Edison’s Demand Response policy.  The group learned that when strain on the power grid reaches a maximum, the company contacts institutions to request they shut down power in exchange for payment. Perhaps, the team thought, a similar benefit could be earned by individuals. They began thinking about how their device could be used to support a demand-response program directed at consumers. They could shut down their appliances remotely upon Con Edison’s request and earn a payment from the power company.

Struck by their creativity and enthusiasm, Prof. Lima encouraged them to apply to NYCRIN          I-Corps’s competition for the most promising teams in the northeast. Nikhil and Robert were admitted and continued to work on their idea. The I-Corps “bootcamp” was taught by Ms. Pellicane; Jim Aloise, Senior Licensing Officer at Columbia University; John Blaho, Director for Industrial-Academic Research, CUNY; and Micah Kotch, Director, New York Prize and Strategic Advisor for Innovation, NYSERDA. Nine experts from the fields of venture capital, communications technology and business innovation advised students as well. Their colleagues were made up of graduate students, post-docs and business people. But they found that they were well prepared. Robert noted that they had grown more savvy in their approach to interviewing. “In I-Corps you are expected to do as many interviews as possible (15 interviews per week were expected), so for our time in I-Corps we had a relatively low number of 32 interviews. After EID we became more comfortable with interviewing and focused more on industry managers to answer our questions.  We wanted to investigate what problems demand-response aggregators currently face and why the residential sector is underused. We interviewed the demand-response operators and the manager of commercial demand-response at ConEdison.”

After all their research, the two made an informed decision not to continue with the project. “There were many factors that made our proposed business not viable. A major factor was that the lifetime value to the customer-acquisition cost ratio was too low,” Robert said, referring to the expenses incurred in trying to gain new customers over time.

They both found the experience inordinately valuable. “At the end of the process we were lauded as the best presenters and the students most likely to succeed in the future,” said Nikhil. “This opportunity was more than just about building our company, though; to me it represented a chance to build my skills that I would never learn in a class, such as how to speak with experts and build relationships with people that will guide you in your career.” Robert added, “If we ever come up with another idea in the future, we will use the lean startup methodology that we learned through EID 103 and I-Corps in assessing the viability of our idea.”