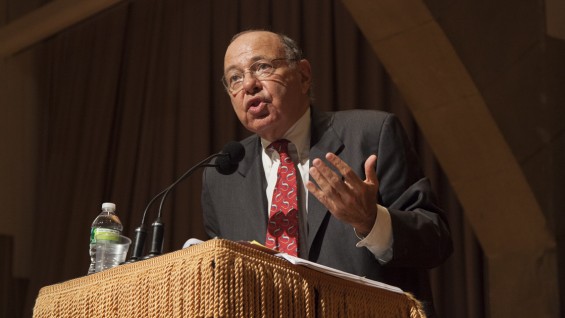 Burt Neuborne in the Great Hall

Though famed civil rights attorney Burt Neuborne's popular weekly lecture series on the U.S. Supreme court and the Constitution ended on December 13, it can still be enjoyed thanks to broadcasts by C-SPAN 3 and podcasts of the series made available by The Cooper Union.

C-SPAN 3 will broadcast the first lecture, The Supreme Court's Evolving Interpretation of the Constitution, on Saturday December 15 @ 9:20am ET, Sunday the 16th @ 4:20pm ET and Monday the 17th @ 5:20am ET. Additionally The Cooper Union will make the complete series available as free audio podcasts beginning in early January.

This past fall, Professor Neuborne, the Inez Milholland Professor of Civil Liberties and founding Legal Director of the Brennan Center for Justice at New York University Law School, delivered his free, public, nine-part lecture series, titled “Three Constitutions: Republican, Democratic and Consensus,” in the Great Hall to hundreds of audience members. The talks focused on the evolving interpretation of the U.S. Constitution at a time in history when many Americans feel deep political divides in their country. Developed for a public that is engaged and curious but not necessarily working in legislative or legal professions, Professor’s Neuborne’s series examines many areas of law and explored how the Supreme Court decides the issues.

Professor Neoborne’s lectures examine areas as diverse and timely as free speech for corporations, massive electoral spending, and immigration law efforts at the state and federal levels—and how the evolving interpretation of the Constitution affect each. Professor Neuborne posits that the interpretation of the Constitution by Supreme Court justices has always been influenced by the changes in our society over the years.

Read our interview with Burt Neuborne for more about his work and the series.