Cloudy with a Chance of Eggs 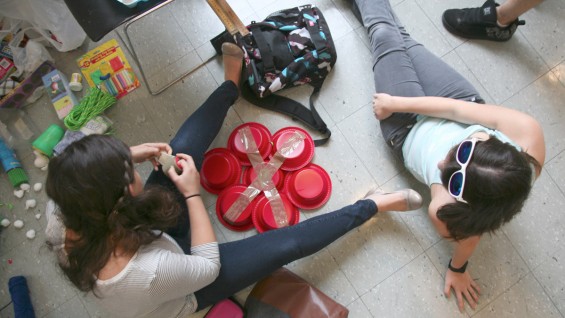 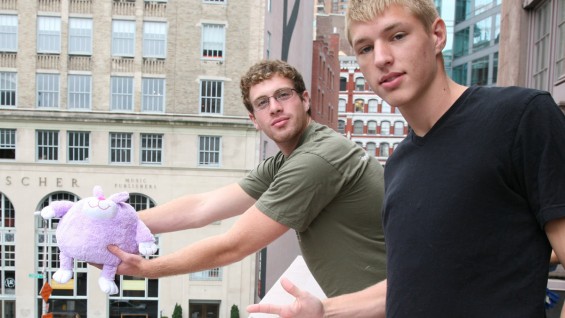 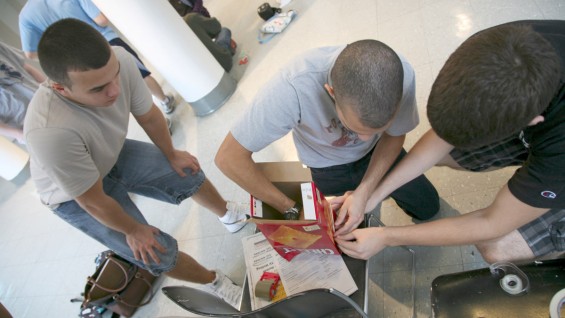 Amid gusting, stormy winds the annual Cooper Union Egg Drop went forward unabated.  Eight student teams tossed their egg-safety devices from the third floor of the Foundation Building to the pavement below in hopes of winning the $60 grand prize and a free, unbroken egg.  Take a poll on which of four entries you think would win, then follow the link below to find the answer.

The first team, made up of engineering freshman Andrew Koe and Jay Wang arrived with their entry semi-built.  “The egg is wrapped in toilet paper and then suspended by rubber bands inside a shoebox,” Jay Wang said, displaying what looked like a spider’s next meal caught in a multi-colored web.  “Then we are using a plastic bag as a parachute.”

Robert Walsh and Danial Fagan, both freshman engineering students, focused on making an “impact continuator” out of a Lysol wipes canister, a can of tuna fish, popped popcorn and Styrofoam plates.  “The can of tuna acts as a weight at the bottom to keep it landing straight,” said Robert Walsh, “while the egg sits at the top, falls through and its momentum gets gradually reduced by the popcorn.”

Engineering freshmen Anthony Traina, Frank Longueira and Joseph Viola took full advantage of the typical dorm-room accoutrements in their device. Placing the egg inside an empty, jumbo-sized Cheez-It box rigged with rubber bands and a roll of toilet paper the team’s strategy was to “oscillate rather than compress the egg,” according to Joseph Viola.

Perhaps aiming as much to attract the attentions of the few female participants as much as protect their egg, engineering freshmen Matt Kaufman and Eugen Sokolov, assisted by third year architecture student Dustin Atles, arrived with a fuzzy, purple, vaguely ovoid-shaped stuffed animal they had named “Mr. Snuffles.”  Confident thanks to some preliminary testing, the team slit open a tennis ball, put the egg inside and then put the capsule inside the belly of “Mr. Snuffles.”

Alexa Orrico and Amy Chambers, both freshmen engineering students and the only all-women team, defied the prevailing strategy of arriving with a device at least semi-constructed and instead arrived with just the knowledge of physics in their heads.  “We are focusing on impulse,” said Alexa Orrico as she and her partner filled a plastic cup with cotton balls, stuffed the egg into it and attached the cup to plastic plates that had been lashed together to form a  stiff parachute.  “Impulse is force multiplied by time,” Chambers added, helpfully, “We are increasing the time by using as much air resistance as possible.”

Take the poll and click here to find out the winner.

Which Would Win the Egg Drop?
END_OF_DOCUMENT_TOKEN_TO_BE_REPLACED