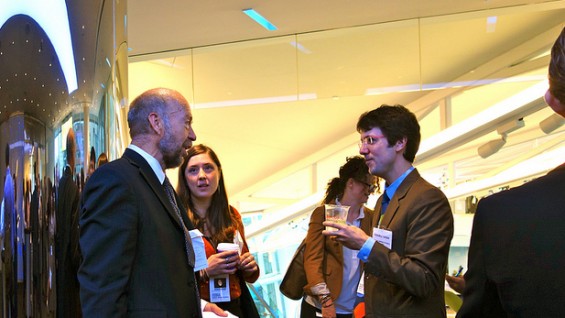 The crowd was upbeat, considering the seriousness of the topic - an assortment of designers, architects, students, scientists, politicians and more gathered on Tuesday morning at the Bloomberg building for Urban Green’s symposium “Cooling on Climate Change: Designing the Message.” The crowd had braved the rain to discuss two issues: how can we more effectively communicate about climate change? And what role can the green building community have in this effort?

The event kicked off with a keynote address by Dr. James Hansen, Director of the NASA Goddard Institute for Space Studies (referred to by the moderator as the “Lady Gaga of Climate Change,” a playful nod to Hansen’s centrality to the climate movement) and featured such distinguished guests as Bryan Walsh (TIME International), Daniel A. Lashof (Natural Resource Defense Council), Lisa Fernandez (Yale Project on Climate Change Communications), Douglass Wyatt Hocking (Kohn Pedersen Fox Associates) and many others.

The first panel gave a lucid picture of the “state of the field” of climate communications. The precipitous drop in belief in climate change seems to have abated somewhat, but is still far lower than its 2003 peak; panelists emphasized that stating the facts is necessary but not sufficient to convince your audience; and the issue of “framing”—how we should phrase the issue in order to most effectively reach people—was a constant focus of the discussion. As Lisa Fernandez mentioned, health concerns continue to be one of the most effective ways to reach members of the public who might be otherwise unmoved by images of melancholy polar bears.

As the topic shifted to green building for the second panel, the talk became more pragmatic, but stayed focused on the theme of framing. As Dan Probst of Jones Lang LaSalle put it, “climate change just isn’t a key driver in green building investment.” Just as health appears to be the most productive way of framing climate adaptation for a general audience, so economics appears to be the most productive way to frame it for a real estate audience. And, as Probst elaborated, nothing helps better than a great example: the LEED Gold Certified Empire State Building saves approximately $4.4 million dollars annually in its energy costs. This is the kind of statistic that speaks to the real estate community.

The takeaway was seemingly paradoxical—if you want to talk about climate change effectively, talk about something else.

For more on the event, check out Urban Green’s blog post