Diego Malquori crossing the Pacific in 2014

Diego Malquori, assistant professor of philosophy in the Faculty of Humanities and Social Sciences has just seen his first novel, L’incomprensibile ambiguità dell’orizzonte. Un sogno fatto a Ginostra (The Incomprehensible Ambiguity of the Horizon. A Dream Dreamed in Ginostra), published in Italy by Mimesis. Already established as a polymath with degrees in both philosophy and astronomy, perhaps it should come as no surprise that he would also be a writer of fiction. But what may be a surprise is that the book began as a short script during Malquori's earlier days as a filmmaker and was further fleshed out during a months-long sailing excursion across the entire Pacific Ocean, spent with only his brother. 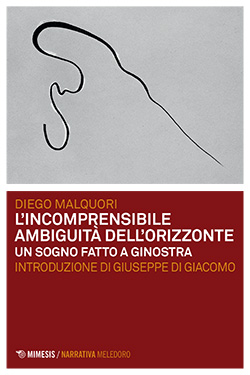 "I had reached something of a crisis at that time. Among other things I was living in Spain and teaching in a French school," Malquori, who was born in Italy, says. "I had to choose whether to make that my career, which was not terribly satisfying, or look for something else. I decided I had to quit. Then my brother asked if I would join him on his sailboat to go from Panama to Polynesia. We were alone, disconnected from everything. It was wonderful. Your mind can fully follow through on its remotest ideas." After filling notebooks during the journey Malquori stopped at a small pacific island where he immediately got a job at a local museum as a translator and finished the bulk of the novel.

The book, whose very title implies an author sitting on the deck of a boat looking out for many days, takes place in a tiny village on the island of Stromboli, in Southern Italy. Though set in the early 2000s, the book's narrative crux orients around the arrival of electricity, long delayed due to the village's inaccessibility. Vincenzo, a fisherman and the book's main character, doesn't look forward to it. It's really more the meaning of it – modernity, unquiet – that bothers him than anything else. Other characters, including a German painter, the village priest and a widow, weave in and out of a narrative that mostly follows Vincenzo's inner thoughts. These he expresses almost exclusively to his cat, Lisca Bianca (White Fishbone).

"Much of it reflects my philosophical interests," Malquori says. "Many of my students would recognize the themes in the book. In the fifth chapter, for example, I indirectly quote Kandinsky’s idea of 'internal necessity.' Kandinsky's 1925 "Drawing for ‘Point and line to plane'" is even featured on the cover. This past Fall I taught a course on Art and Modernity, also devoted to Kandinsky."

There are no plans to publish the book in English at present, though he has translated two chapters.  Read an excerpt from chapter five, below.

Vincenzo, a fisherman on the island of Ginostra, pays a visit to Johann, a German expatriate whom he has known for many years. Johann sits in his garden working on a painting of abstract imagery.

Their conversations were almost silent. It was like a round of questions that had no answer, and that in turn generated more images. Johann liked the curiosity of Vincenzo, his naive questioning that revealed a living spirit, still capable of surprising. Many times he himself did not know how to answer, but still continued to think about it, and perhaps that naive question suddenly birthed in him new ideas, even at night, or the day after. Sometimes, when they met, jumping over the normal ceremonies, they resumed the conversation with the very question that was left unanswered.

―Look, Vincenzo, do you remember when you asked me the reason for those colors?

For his part, Vincenzo tried to discover the secret of that different way of seeing the world. It was certainly not the technique that interested him, needless to say, nor had it ever occurred to him to learn something about Johann’s way of painting. He was not even able to draw a tree, for God’s sake! That wasn’t for him… But he equally liked sitting there in silence, trying to see things as Johann seemed to imagine them: totally abstract, deformed, or in any case different from what appeared to him. Sometimes, almost for fun, he tried to imagine the direction that Johann would take at that moment. With what color, what strength, what intensity he would continue creating those images. But the fact is that even Johann didn’t know before starting. It was the forms and colors that dictated the way to follow.

―Giohann, can I ask you something?

Vincenzo was sitting behind him, on that great rusty green chair where Johann sometimes sat down to look at his painting from a distance; but when Vincenzo was there, he always invited him to sit on that throne, as he jokingly called it. White Fishbone, meanwhile, was resting idly under the sun on the terrace wall, where she could keep quiet and at the same time control the situation from a distance. She always seemed happy when accompanying Vincenzo to Johann’s house […], while she seemed to sigh every time he went to the village; even if then she also accompanied him, from a distance.

As usual, Johann answered with a smile, waiting for Vincenzo’s question while still painting.

―I don’t know… sometimes I see that you are looking around. But how do you imagine a storm when the sea is so quiet today?

Johann did not turn, but looked up for a moment as if were seeking an image more meaningful than words. Then, with a slight smile, answering almost more to himself than to Vincenzo, he replied with a new question, unconsciously continuing that play of unanswered questions.

―Why? Do you only see with your eyes…?

Then he left the brush on the small table beside him, amid the colors, the rags, and the other brushes. It had to be something important, evidently. He sighed as if he were preparing for a long speech. But he only said a few words, circling around, suggesting, but as usual, avoiding an answer.

―Yes, that’s true. It’s easier looking with the eyes. You see many things, many colors… But sometimes even the eyes deceive you. So if you close your eyes, you can almost see better…

He would have said more. That simple question, once again, touched one of the central points of his inner search, in art as in life. It was not just a belief, an aesthetic idea, a theory like any other. It was actually an internal necessity, something that forced him to feel that way, to reject the idea of art as the simple satisfaction of an aesthetic pleasure. He would have spoken of the inevitability of that inner gaze, when all the certainties of the external world are not only shaken but have long since collapsed. Because it is from that rejection, from that looking beyond the surface, that one can see the invisible essence of things. Only in this way does the true dimension of life appear…

He would have talked about all this; but he said nothing and took up his brush again, remaining suspended among his own thoughts. It wasn’t just the fear of not being understood. He was used to the incomprehension of those who do not want to listen. And this was certainly not the case for Vincenzo, who could feel these things without the preconceived ideas of many other people. Moreover, everyone has the right to read a work as they wish; even Vincenzo, of course… Who cares about knowing the entire history of art? Everyone, within himself, can feel the experience of any gesture on a canvas. Indeed, it is that feeling that completes the trace on the canvas, that gives it life, even for a white trace on a white canvas.

He did not say anything because he felt himself confused in the midst of those thoughts. It was something that he clearly felt, but if he tried to explain it, even to himself, it seemed to vanish forever. As he once said to Vincenzo, it was as if he were asked how he was breathing: when thinking about it, it seemed as though he no longer knew how to do it. That is why he expressed himself through images, to make visible what cannot be said by mere words.

Vincenzo, meanwhile, was seeking a way to understand those images by himself. He continued to look at that painting that seemed to express the idea of a storm, but it was as though he had his eyes closed, thinking to himself. Perhaps he thought of the way he squinted his eyes to focus better, as he used to do when he was blinded by the reflection of the sun. But then he closed them altogether, as if he were concentrating on hearing something.

The bells had already announced the approaching mass. White Fishbone immediately pulled up, as if it were the first time she had heard that sudden sound. But a moment later she was in the garden path to prepare the way for his companion. Vincenzo took leave with his usual see you around, to which Johann responded with an affectionate pat on the shoulder, using the hand that didn’t have the brush. As he left, he turned for a moment to look again at the painting. He had a slight smile as if he recognized something inside him. But he left, without finishing the thought.

Translated from the Italian by Diego Malquori